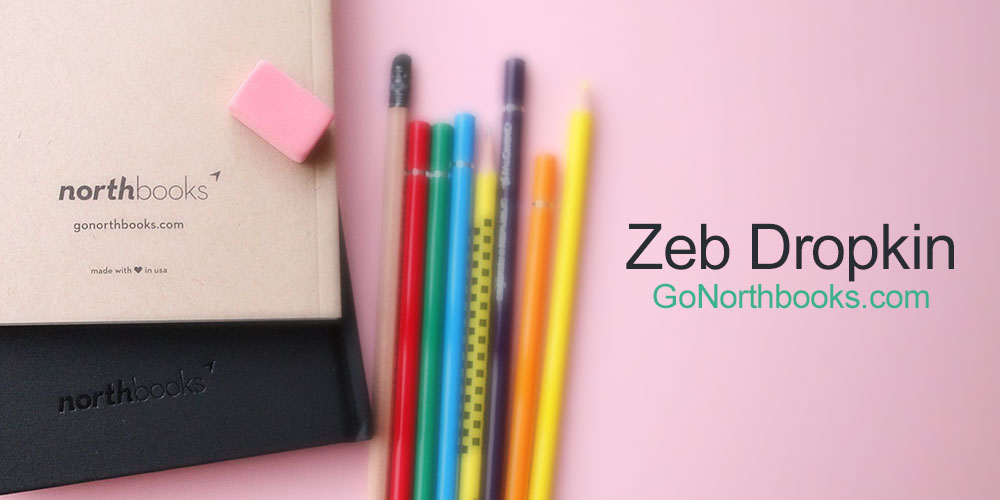 We are all spending increasingly more time in front of screens. As we forge ahead with moving nearly everything to the digital world, many of the things we love about the physical world start to get left behind.

Zeb Dropkin is helping people unplug through his high-quality notebook line, Northbooks. Over the past year, Zeb has turned Northbooks from just an idea into a reality that is getting into the hands (literally) of new customers each and every day.

Here’s Zeb’s story on how he created Northbooks.

The idea behind Northbooks began with the realization that Zeb was spending so much time in front of digital devices that he was missing the tactile experience of interacting with something in the real world. “Northbooks was born out of my frustration working in a pure software company and not having a physical product,” he explains.

At the time, Zeb was trying to find a product to sell in the eCommerce space, which he had wanted to try his hand at for quite some time. “I decided to try a product that I could really get behind, that I wanted to use myself and that I had some passion for,” he recalls. “I wanted something that I believed in enough to keep at it.”

As it turns out, the answer was with him all along.

“I always travel with a battery, my phone, my computer and a notebook. I love having that one analog thing that I always keep in my bag,” Zeb explains.

Once Zeb recognized his fondness for notebooks, he set out to create the best one possible for himself and others who share his appreciation for a well-made journal.

Zeb found inspiration for his new company’s name in a recent addition to his life. He has a young nephew named Northman — though Zeb usually refers to him as ‘Northie’ or ‘North’ — so the word ‘north’ was on his mind a lot.

While ‘north’ was floating around, Zeb was trying to think of something that was similar to the word ‘notebook.’ “I wanted something that could play on ‘notebooks’ and was natural,” Zeb explains. It was only a matter of time before he soon combined the two words to form ‘Northbooks.’

After thinking of this name, Zeb didn’t spend too much time dwelling on it. “I was with some friends and they were like, ‘yeah, just go with that,’ and I just ran with it from there,” he describes.

Northbooks is not Zeb’s first business. In fact, he is currently also working on RentHackr, an online apartment finding network. With a background in marketing and software, he had a lot to learn to get started in the notebook world. Although the finished product is elegantly minimalist, there were a lot of decisions to be made; everything from finding the right manufacturer to selecting the paper quality and binding processes to what designs to print onto them.

Zeb knows what skills he’s great at and, perhaps more importantly, what to trust others with. Though he is the driving force behind the business, he also enlists a graphic designer, print manager, printing company, and photographer when preparing new production runs. “But as far as choosing where things go, what should be there, what do they look like, what materials will we use, what quality paper, what colour — I made all those decisions myself with input from friends, family and random notebook users that I happen to meet,” he adds.

What makes Northbooks unique is the attention to detail that Zeb puts into their production. In fact, the notebooks are produced in the U.S.A. to better ensure that they are of the highest possible quality. ”Doing something domestically with people who I could talk to and go visit – see how it’s done and learn from – that was really important to me,” he explains.

Though Northbooks is still a very small part of the notebook world, Zeb believes that it is their uncompromising focus on quality and not quantity that will be their strongest driver of success.

“We like being a brand and a small business that isn’t doing a commoditized race to the bottom price; we’re doing something that people can recognize is an effort that supports people that they can relate to working in places that they recognize to get a high quality product done.”

Although it may be tempting to do everything digitally, some things just can’t replace the experience of putting pen to paper.

“If you’re in a meeting and you go on your phone it’s pretty distracting and sometimes taken as not being respectful. Bringing out a notebook and a piece of paper is always OK to write notes — and if you’re bored, you can just doodle.”

Check out gonorthbooks.com to order your very own Northbook notebook!

Have an idea for your next big idea? Find it a great domain name from Hover: