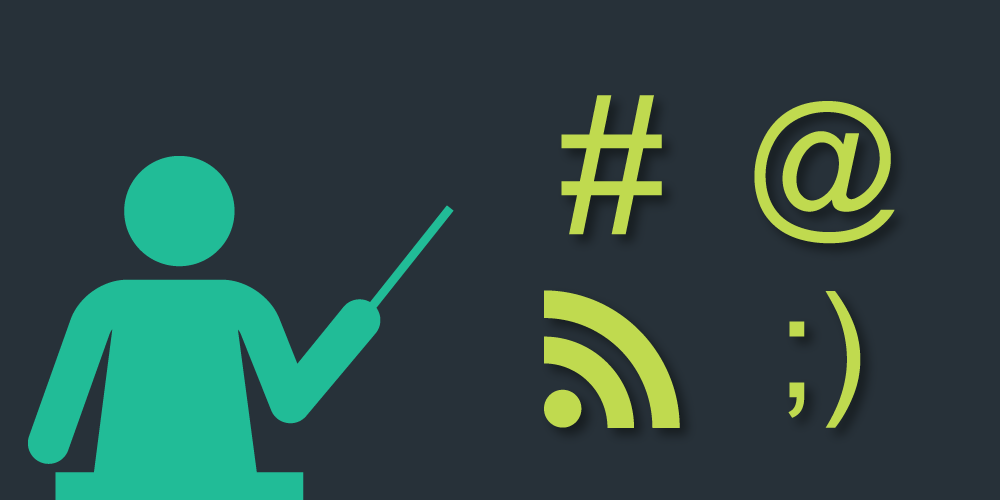 We use a ton of symbols every time we go online, yet rarely stop to wonder how these symbols came to be. When you think about it, a lot of questions begin to come up: how did # become a hashtag; how did @ become used in email addresses…

Web designers use symbols as a way to communicate an idea to a person in the most efficient way possible (you can read more about this idea here). In this post, let’s take a brief look at some of the most commonly-used web symbols and how they were created.

Most people nowadays know the # symbol as a hashtag, a way of categorizing a message according to a certain topic on social networks like Twitter and Instagram. The symbol, however, long predates its current use.

Before hashtags, # was referred to as a number sign. Once we started using computers, the symbol would soon go through a number of use cases before what we’d recognize today. In 1988, Jarkko Oikarinen invented Internet Relay Chat (IRC) as a way for people to exchange messages over the Internet. It’s what would commonly be referred to as a chat room. The # symbol was (and still is) used in IRC clients to group discussions into channels. For example, we use Slack at Hover for communication and have many channels to keep conversations on-topic, ranging from #brand-hover to the all-important #topic-cats.

On August 23, 2007, Chris Messina had a suggestion (inspired by IRC) that would forever change how people use social media:

how do you feel about using # (pound) for groups. As in #barcamp [msg]?

Twitter took the suggestion to heart and added the ability for users to organize messages according to topic by typing a word after a # and then automatically hyperlinking it to tweets that have used the same hashtag. Let that be a lesson to speak up when you have a great idea; you could end up changing the way we communicate! #impressive

The at sign first gained popularity online for its use in email addresses. Ray Tomlinson implemented it in 1971 as a way to distinguish between local mail and network mail. In other words, @ was a way to identify a particular user that is using a mail host (e.g. name@host.com). As he explains, “the at sign just makes sense. The purpose of the at sign (in English) was to indicate a unit price (for example, 10 items @ $1.95). I used the at sign to indicate that the user was ‘at’ some other host rather than being local.”

Besides email, @ is used in various contexts to get a person’s attention. In a discussion thread, @name is often utilized to signify that a message is directed towards a specific person. This same idea is used on social networks, though these take it one step further by notifying a person that a message has been directed towards him or her. In this context, the @ serves as a method for tagging a user.

The exact origin of using punctuation to form emoticons (emotion icons) is unknown, but there are some known examples that predate the web. Perhaps the earliest is in March of 1881, when Puck magazine published a diagram of how to use typographical art to express joy, melancholy, indifference and astonishment.

Besides a few isolated examples like this, emoticons didn’t really take off until over 100 years later. In September of 1982, Scott Fahlman became the first documented person to use the modern emoticon. On the Carnegie Mellon University computer science general board, he posted the following message to help distinguish serious posts from jokes:

Over 30 years later, we are still using the same format (often minus the dash for a nose) to add tone to otherwise emotionally ambivalent sentences. Many programs will even translate emoticons into pictures that provide a more detailed depiction of the emotion.

RSS – Rich Site Summary or Really Simple Syndication, depending who you ask – is a standard of web feed formats that lets you subscribe to a feed of content from your favourite blogs, news sites, and any other website that regularly posts content (and has set up RSS). Rather than manually going to all of the websites you regularly check, you can add RSS feeds to a feed aggregator like Feedly or NewsBlur and view all of your articles in one convenient location.

Before the dot and 2 curved lines that we all know today became the standard, website creators were all over the place in terms of what visitors should click on in order to subscribe. Since the format was still relatively new, should the button say RSS, XML (the file format used for RSS) or some other word? Here’s a sample of some of the many buttons that could be found in the late 90s and early 2000s:

Meanwhile, Stephen Horlander had designed the now standard feed icon for the Mozilla Firefox browser in September 2004. Horlander chose not to include “RSS” in the design because it was also also intended for Atom and other web feed formats. In December 2005, Microsoft’s Internet Explorer and Outlook teams announced that they would start using Mozilla’s RSS symbol. Opera Software followed suit a few months later. As others continued to adopt the feed icon, it soon emerged as the standard icon to be used for visitors to subscribe to a site’s feed.

Have any other web symbols you’d like to know the origins of? Let us know in the comments!