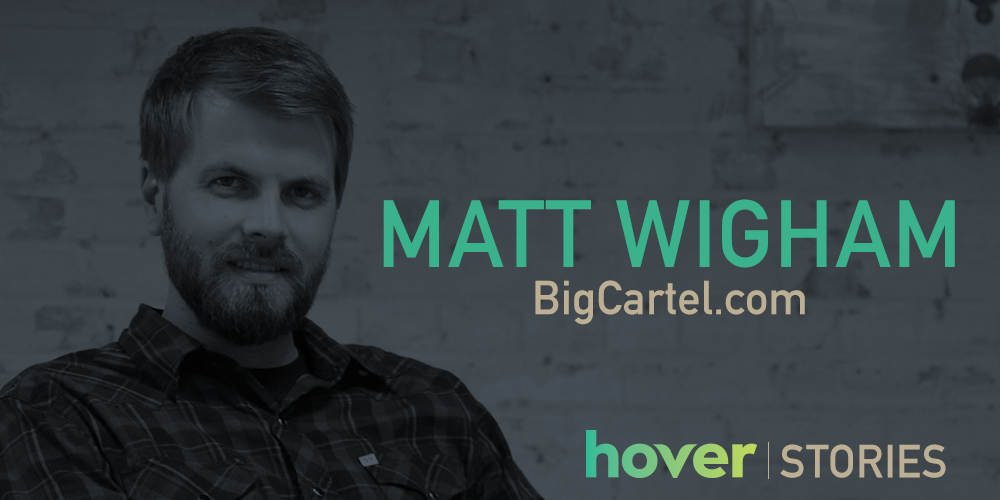 When it comes to Internet tech companies, we’re all familiar with the now cliché story. A young unassuming college student develops some software in his college dorm room, rapidly gets millions of devoted users, and then gets acquired by Apple/Facebook/Google for billions of dollars.

Or perhaps they don’t get acquired at all, but instead take multiple rounds of funding from venture capitalists, receiving hundreds of million of dollars to make their already quick growth explode, forming their own large corporation.

Either way, it’s all about getting as big as you can as fast as you can, right? According to Matt Wigham, co-founder and CEO of Big Cartel, that’s not the case at all.

“A lot of the tech press likes to focus on the really exciting Valley news of rounds of funding,” he explains, “and I think that can be what new entrepreneurs assume is the only route.”

Big Cartel, celebrating its 10th anniversary this year, shows that this is far from the case. “It’s a very traditional business in the sense of we make a product and we make our money by charging people that want to buy it,” he reflects. “It’s funny that that’s a novel idea or an anti-approach in our industry.”

What Is Big Cartel?

Big Cartel is an ecommerce solution designed for independent makers, designers, musicians and artists. They know that their customers have better things to do than worry about their website, which is why they make running an online store as simple as possible. There are beautiful (and responsive) themes to choose from, order management, inventory tracking, stats, and pretty much anything else you need to sell stuff online.

But we’re probably not doing it much justice. You can get a full product tour here.

How It All Started

Matt was – and still is – very much like the community of independent artists that use Big Cartel. He was playing drums in a band and needed a way to bring their merchandise online. “Big Cartel kind of grew out of that,” he reflects. “It was never really thought of as turning into a company, it was just something that I needed, and I figured a few other people would need, so it was a fun project to work on.”

At first, Big Cartel looked quite different. Its original name was MerchBoss and it was designed to be an online merch table, geared towards bands and record labels. It was quickly evident, however, that they had a much larger audience within reach.

“Once we launched, our very first customer was actually not a band or record label at all, it was a t-shirt guy,” he explains. “Over the course of a few months we had a good mix of some bands and labels but a lot of other types of artists as well. That was when we stepped back to look at what it actually was that we had here.”

Since its launch in 2005, Big Cartel has experienced steady growth since day one. Matt attributes this to the company’s ability to solve its customers’ needs in organic ways. “We got signups the first day and it slowly started growing purely from word of mouth,” he explains. “Actually, we’re still word of mouth,” he adds.

Their first big milestone was in 2007 when Matt and co-founder Eric Turner were able to quit their full-time jobs in order to focus 100% on Big Cartel. At first, however, the two had a different idea of where to focus their efforts.

“We had a parent company and we figured Big Cartel was going to be one of the things that we did,” he recalls. “It wasn’t until we got so busy just the two of us and we had to start hiring people when we realized that Big Cartel was the business.”

Over the years, they have followed a very traditional business model. They continue to improve their product for their customers, and as their customer base gets bigger and their product more mature, they hire more team members. They currently have around 30 employees (some in their native Salt Lake City and others working remotely), who help manage their many customers. To date, they have helped artists create over 600,000 stores.

It’s taken 10 years to get to where they are, but Big Cartel is exactly where it wants to be. Rather than take funding from investors and trying to grow at an explosive pace, Matt intends on keeping his company independent – exactly like his customers.

“I think it’s really important that they see we are independent, we are bootstrapped, and we are a small team,” he explains. “I don’t think they would have that authenticity with some of the other services out there that are huge huge corporations.”

There are also many advantages to being independent that have helped contribute to Big Cartel’s success. “Being independent and not really answering to anyone other than our customers has been really nice. All we have to worry about is making them happy. If we do that then we stay in business.”

Not surprisingly, Matt’s biggest piece of advice is to try to do things yourself as much as possible. “I would love to see people really give independence a shot,” he urges, “and really get to experience the benefits of running your own show and having full control both creatively and financially over a project that hopefully you’re really passionate about.”

Matt also thinks that many people simply don’t realize how easy it is nowadays to start an online business. “You can really make a profitable business that isn’t too reliant on huge clients or wavering monthly fluctuation in revenue. And it can be incredibly profitable! If your business takes off then you’ve got no one else to cut the money up with. You don’t have investors to pay and you don’t have all that baggage coming along with it.”

We of course are thrilled that Big Cartel’s domain name is managed through Hover. Much to our delight, Matt is as well. We asked him what he liked about Hover and here’s what he had to say:

“It’s as simple as you thought it could be. It gets out of your way, it isn’t trying to milk you for every last cent with these upsell products. With anything we do we’re always looking for someone that shares our desire for a simple and honest user experience, and we felt like we found that with Hover. I applaud you guys for not taking the bait of trying to have a million different products and a million upsells.”

Ready to get working on your next idea? Get started with a great domain from Hover: