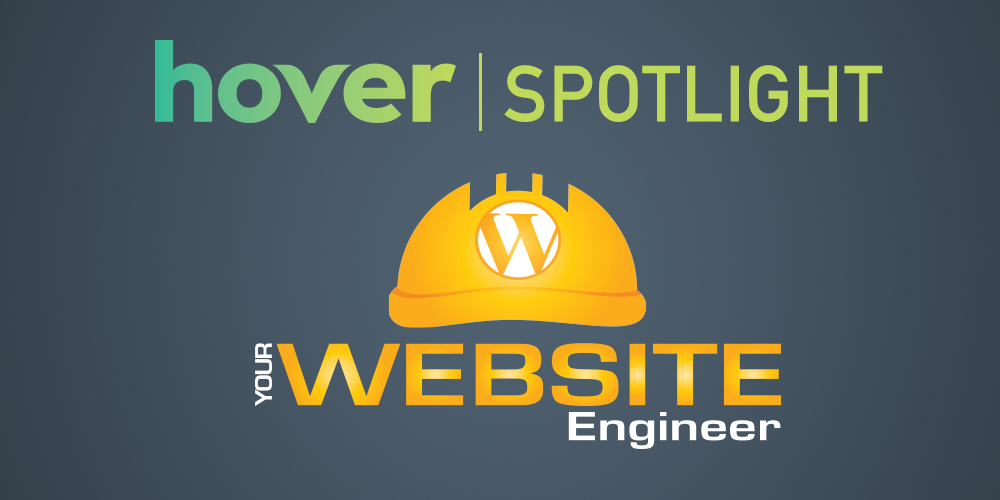 At Hover, we’re big fans of WordPress. In fact, we’re using the popular content management system (CMS) to publish this very blog post that you’re reading right now! As anyone who’s ever used the platform knows, it can be both incredibly simple and highly complex at the same time when using it to manage your website’s content. That’s why anyone who can help demystify this process is a-ok in our books.

If you’ve ever searched for WordPress tips before then you’ve probably come across Dustin Hartzler’s name at one point or another. His weekly podcast, Your Website Engineer, is one of the top WordPress-related podcasts out there, and it’s easy to see why. Dustin has spent the last 4 years releasing an episode every week, diving in to all topics that anyone using WordPress would find useful.

For Dustin, it’s all about giving back to the community that’s helped him with his own career as a WordPress developer (and, more recently, a member of the official WordPress.com customer support team). “I don’t make any extra money because I do a podcast,” he explains, “I’m just doing it to help the community.”

In addition to helping other developers better utilize WordPress, the podcast has also helped Dustin get new projects to work on for his own business. “It just worked out perfectly that even though I gave people exactly the information they needed whether in a blog post or a podcast, there were a lot of people that said, ‘I don’t care, just do it for me and I’ll pay you to do it.’”

In fact, the response from his community enlisting his services was what showed Dustin that he was on to something with his podcast. “I think when I really figured out it was going to work was when I got my first email from somebody saying they wanted to hire me to do some work,” he explains. “I was like, ‘this is amazing, it’s working!’ I don’t even remember what the project was, I know it wasn’t a high dollar thing, but it was just like ‘ok, this is actually working. I’m sharing information, they’re trusting me and then contacting me.’”

Beyond acquiring work through the podcast, it has also developed a loyal listener base that Dustin is always enthusiastic to meet. He travels to a lot of conferences and other social events and always tells people to look for the guy in the orange shirt so they know who to look for. Often times, people will even recognize him purely by the sound of his voice. “I’ve had events before where somebody behind me was like ‘oh, I thought I heard your voice. I knew that you were coming and I didn’t know if I’d recognize you but I recognize you by your voice.’ That’s pretty powerful, that somebody is recognizing you by your voice because they hear it every single week.”

One of the biggest challenges that Dustin faces in creating a new episode every single week is coming up with new ideas, which he explains come from everywhere. He checks what the WordPress community is discussing on Twitter, what’s new in the world of WordPress, things that he encounters in his own development work, common questions from people he’s helping at WordPress.com, and from questions that listeners ask via his website. “The ideas just kind of come from everywhere but I don’t have a magic formula. I wish I did but I probably spend more hours coming up with the ideas than actually recording and creating content.”

Regardless of how many downloads an episode receives, it’s all about being helpful. “I’m pretty driven and just always make sure I have something useful, at least one little nugget of information that will help somebody. It might not be the best jam-packed episode with all kinds of information, but it’s going to at least be useful to somebody.”

Ready to give Your Website Engineer a listen? Check out episode 211 featuring Hover, which you can listen to here.