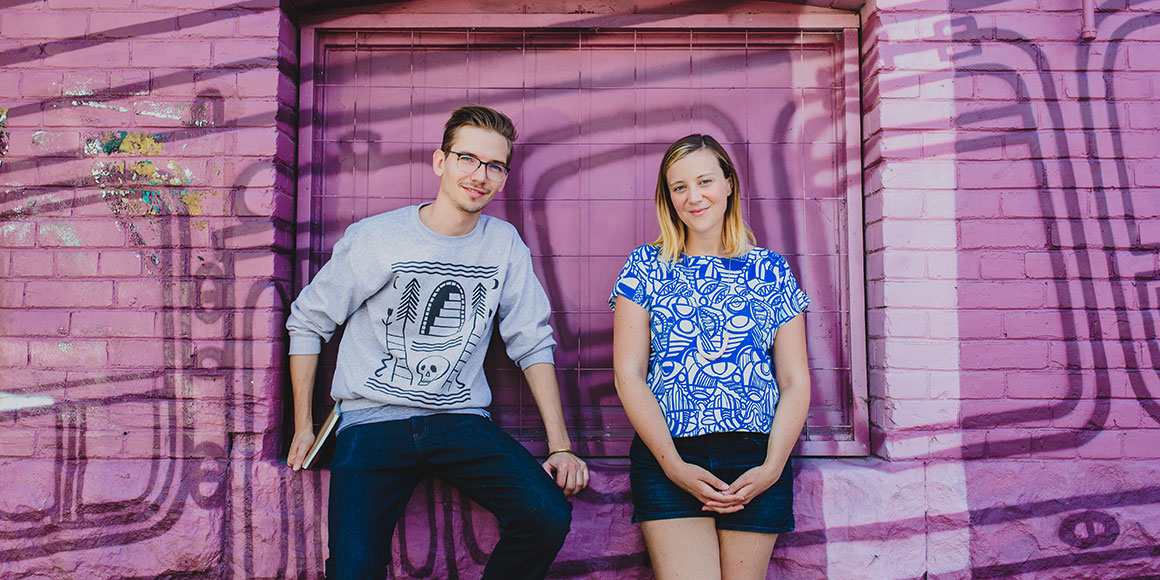 “Success.” “Teamwork.” “Synergy.” Motivational posters with buzzwords like these are so cliché and ubiquitous that they’re now a popular form of parody. Inspiring more eye rolls than action, to say that they are ineffective would be an understatement.

Eugen Sakhnenko and Becca Gilgan, founders of Worker Bee Supply Co., have set out to change the way we see inspirational prints. The duo works closely with handpicked artists to produce intriguing, beautiful and — most importantly — inspiring prints that people will actually want to hang on their walls. 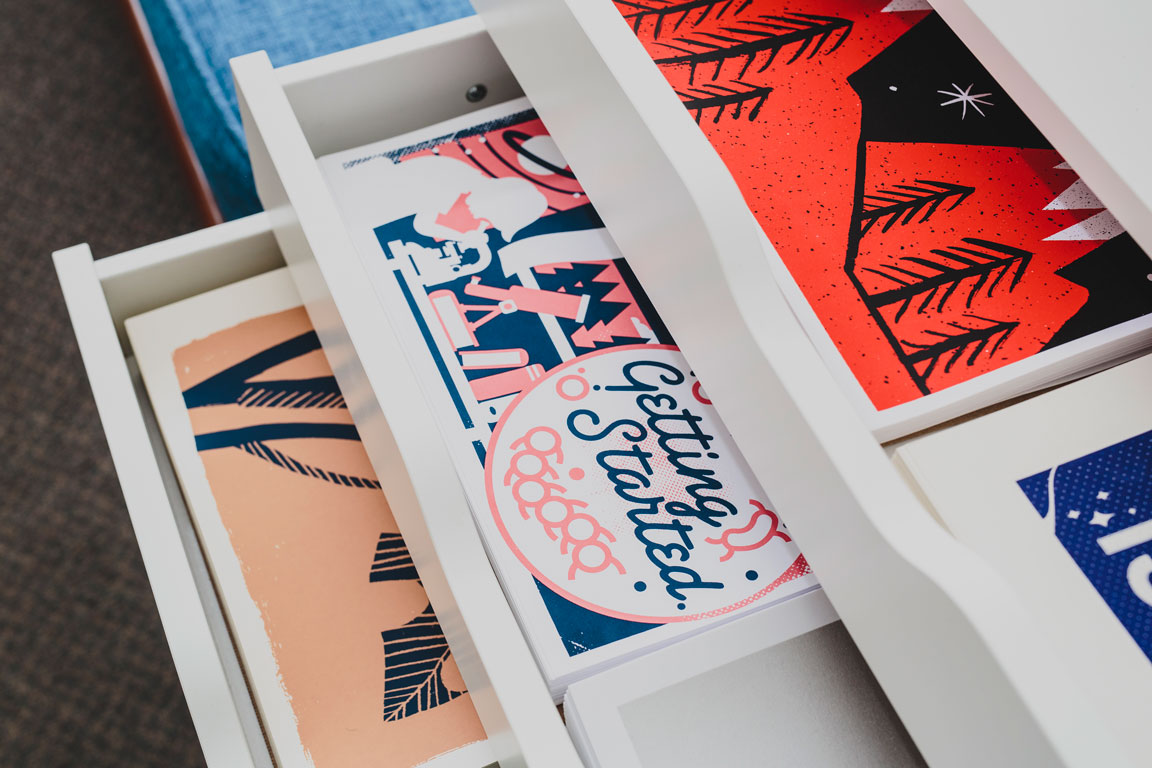 A small sample of some Worker Bee prints.

Eugen and Becca both have extensive experience as freelance photographers and, unfortunately, know the frustrations that go along with being an independent worker in the arts. Eugen puts it rather bluntly: “We know how annoying it is to not get paid consistently. We really wanted to make it fair for the artists.”

“We really wanted to make it fair for the artists.” 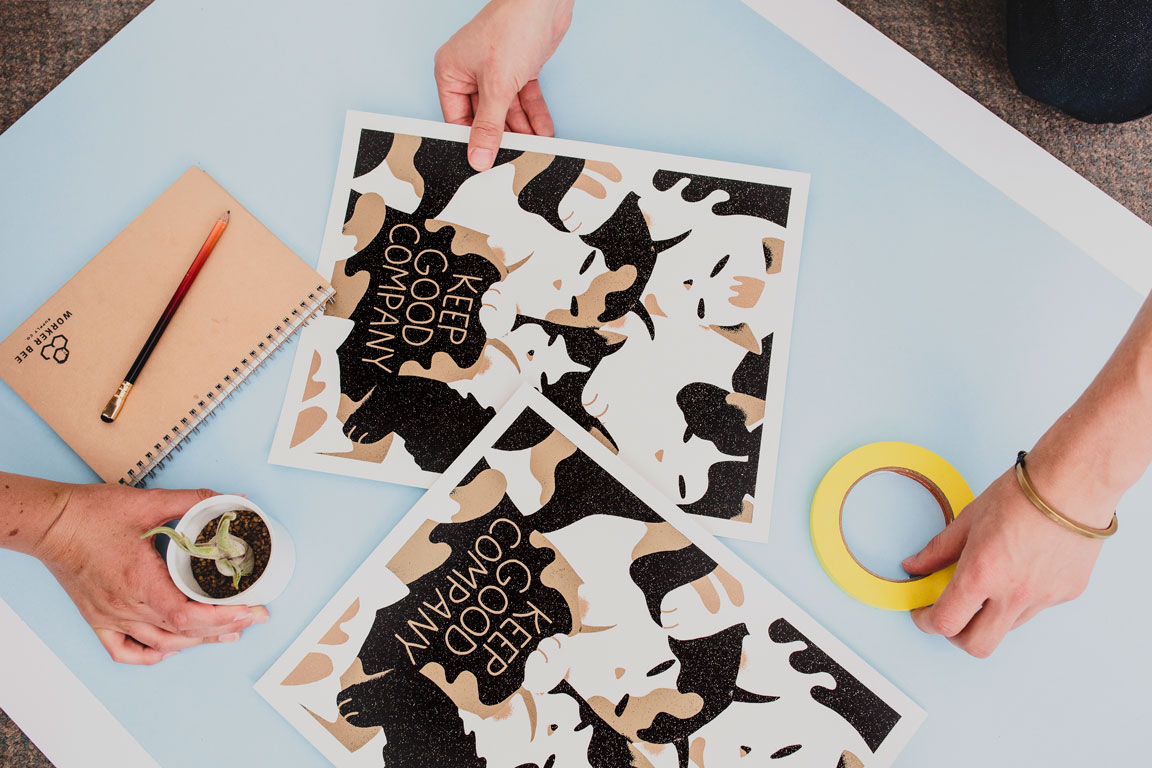 Preparing for a photo shoot for a new Worker Bee print.

Knowing this unfortunate reality, it was important for Eugen and Becca to set up a business that treated everyone involved fairly.

“We wanted to build a product that engaged independent workers and over time leads to a sustainable passive income for them,” Eugen explains. 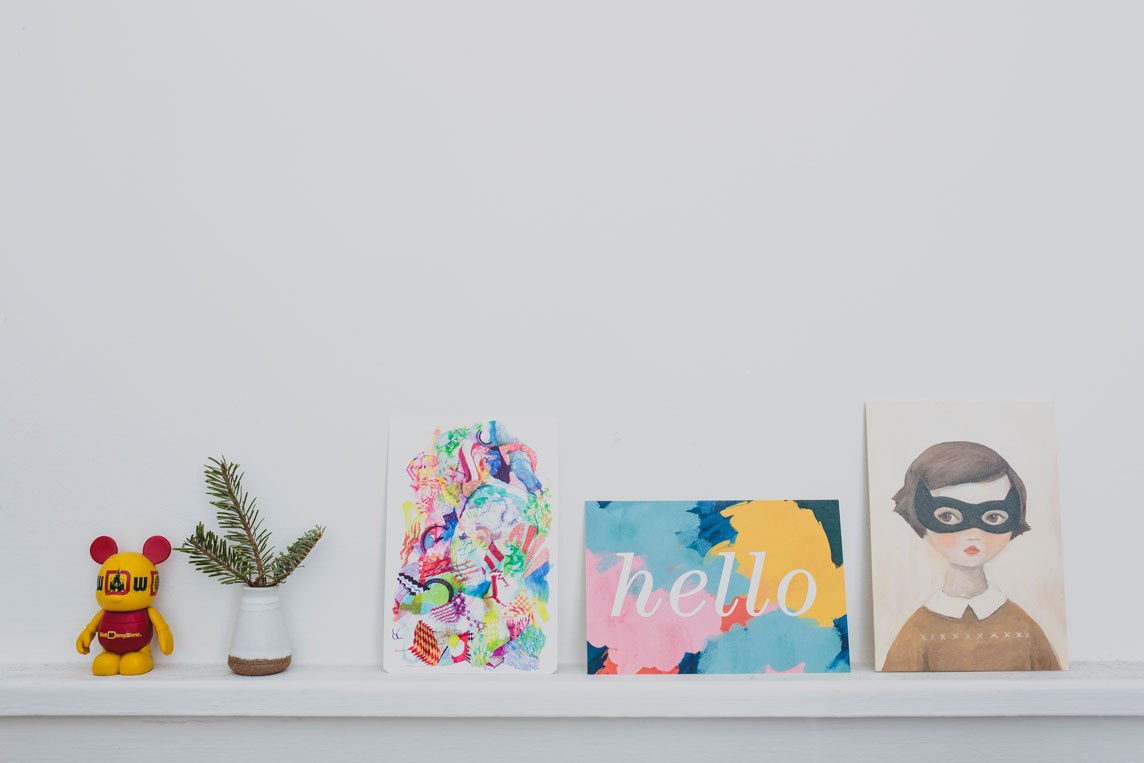 Decorations at the Worker Bee office.

In the summer of 2013, Eugen and Becca wanted to work closely with artists to produce great work in a way that was fair for all parties involved. Their idea was to empower talented graphic designers to make beautiful works of art that combined interesting visuals with meaningful quotes that, over time, would inspire people to do great things.

“The idea is that it lives with you and over time nudges your behaviour in a certain direction.”

The idea, however, would take a few years to become a reality. After thinking of the idea, Eugen moved to New York to pursue an opportunity he had for an internship. After the internship was completed, he moved back to Toronto and started working on the idea in 2014. The business was originally intended to launch in July 2014; however, sometimes it’s worth waiting to make sure you’re doing things the right way. One year later, Worker Bee was finally ready to make its debut in July of 2015 with three prints to get things started.

For inspiration, Eugen looked towards the animal world at a particularly fascinating species: the worker bee.

“Constant evolution and moving onto the next thing really resonated with us.”

“Worker bees are interesting because they take on a lot of roles,” Eugen explains. “They start in one part of the hive and, throughout their lifetime, will work in every single role and increase in seniority; but they’re also independent within it. That constant evolution and moving onto the next thing really resonated with us.”

As a two-person operation, the worker bee metaphor is particularly applicable for Eugen and Becca, who take on an eclectic array of responsibilities not just for this business, but for their freelance gigs as well. 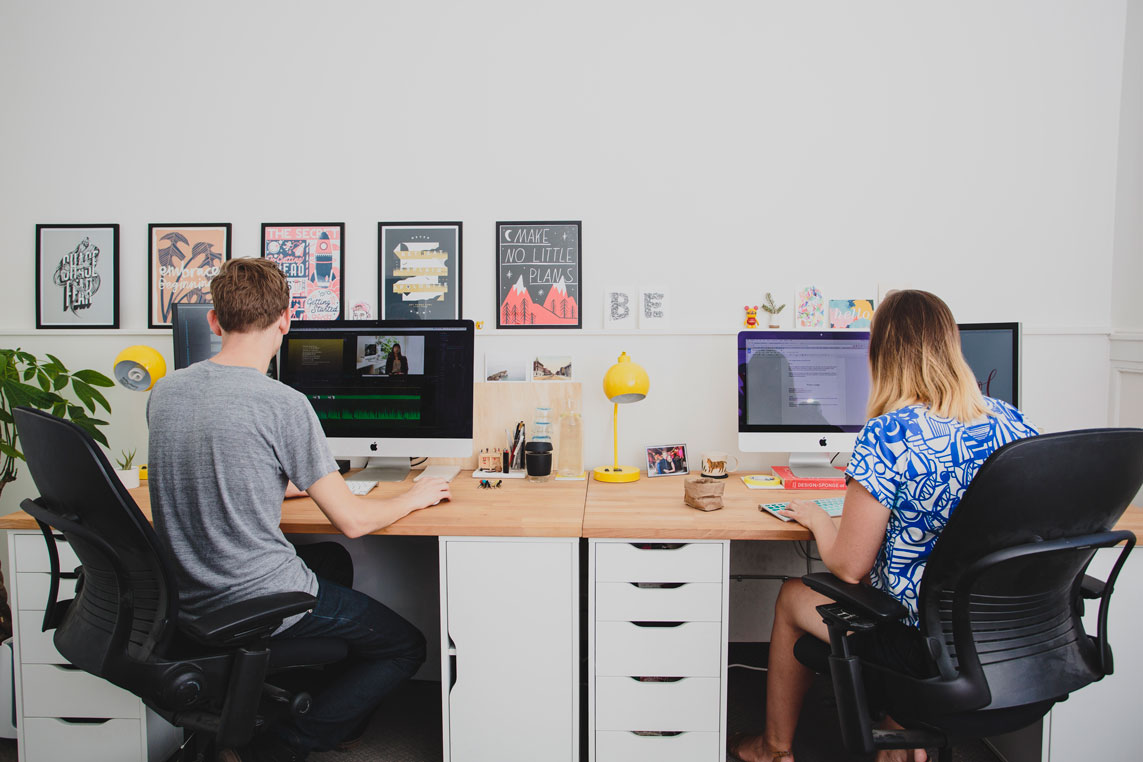 Eugen and Becca preparing assets for a new release.

After deciding on a name for their business, they then sought out for the perfect domain name. Since the majority of their sales are online, finding a unique domain was especially important. Through experimenting with different keywords during multiple Hover searches, they saw that workerbeesupply.com was available and quickly registered it, which have they have been using ever since.

The first and most important step in producing a Worker Bee print is finding the right artist to work with. This is often the most challenging part of the process.

“There’s a very specific look,” Eugen explains. “The quote needs to be actionable in some way — not just a nice statement. The idea is that it lives with you and over time nudges your behaviour in a certain direction.”

There are two main criteria that Eugen and Becca look for in their artists: individuals who combine nice typography with a great illustration style. This ensures that every Worker Bee print is something that people will actually want to hang on their walls.

“The breadth of talent available in this city is amazing.”

“For me, this has been a great opportunity to work with artists I’ve connected with through volunteering at craft shows, particularly City of Craft,” explains Becca. “Having admired their work for a few years, collaborating with them on a project that allows for each other’s skills to be utilized and shared has been a definite highlight. Seeing what the artist delivers to us and then working with Eugen to create a video and a set of images to help further tell the story is the part I find most rewarding.” 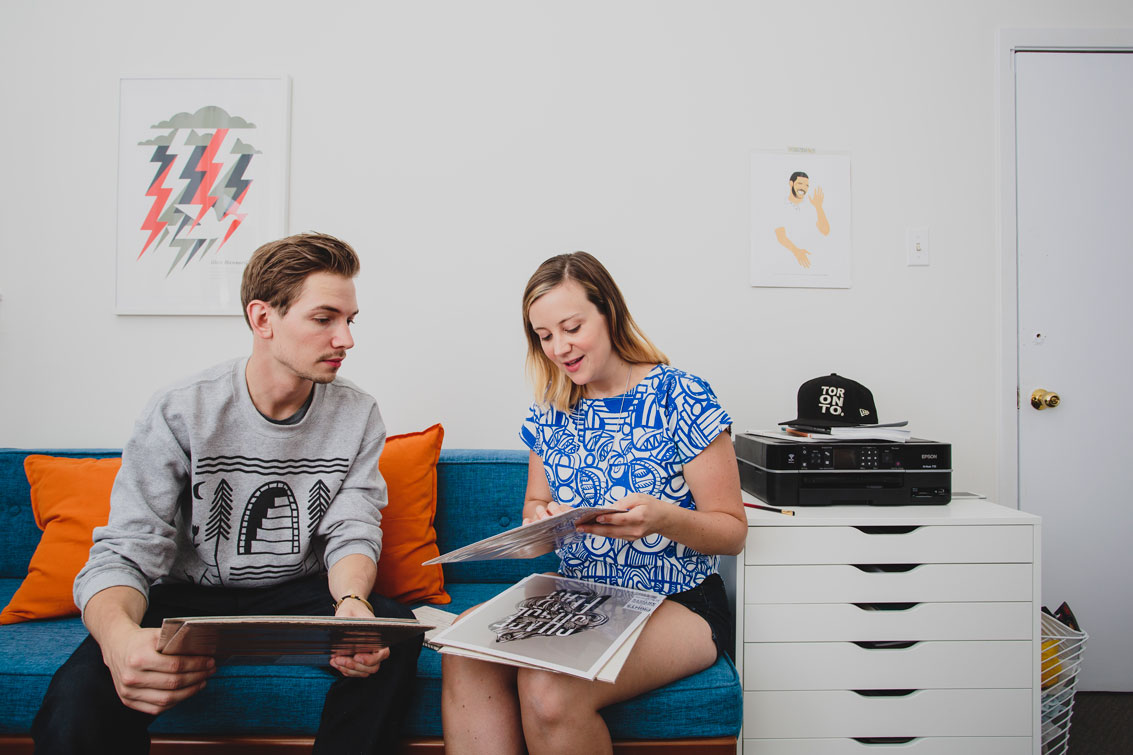 Looking over some recent prints.

Fortunately for Worker Bee, Toronto has no shortage of talented artists to choose from.

“The breadth of talent available in this city is amazing, and scouting out new artists on social media or having an artist recommend a friend they admire is a great way to continue building up the creative and freelance community,” reflects Becca.

Once an artist has been selected and begins working on a print, it is clear to see why the Worker Bee name is so fitting for Eugen and Becca. As a two-person operation, a wide array of responsibilities are divided to produce all of the supporting elements that accompany each print.

Getting Ready for Launch 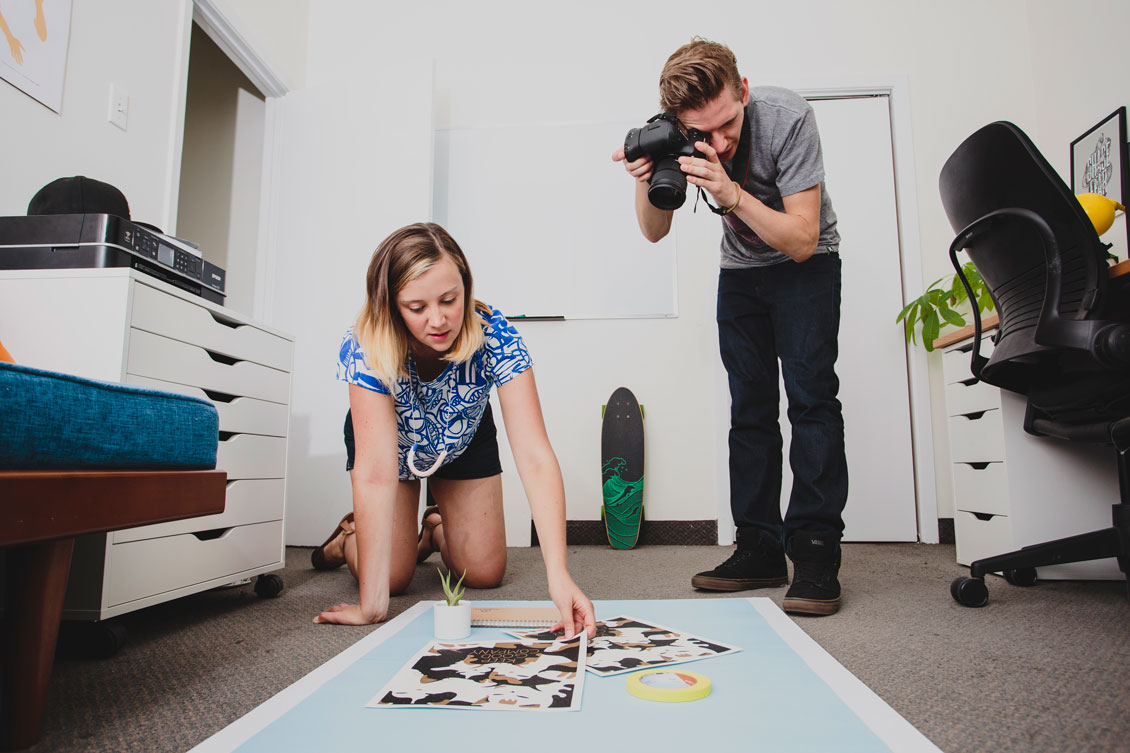 Shooting photos for an upcoming release.

Before a print’s release date, numerous supporting marketing materials are produced. To showcase the artist behind a print, Eugen shoots and edits a behind-the-scenes video. During this process, Becca shares sneak peeks of the video shoot on Worker Bee’s social media accounts.

Meanwhile, Becca gets all of the copywriting ready; each print will require a product description, artist bio, and email.

The final assets needed are beautiful photography to use on social media. As photographers themselves, this is naturally something that Eugen and Becca work together on. 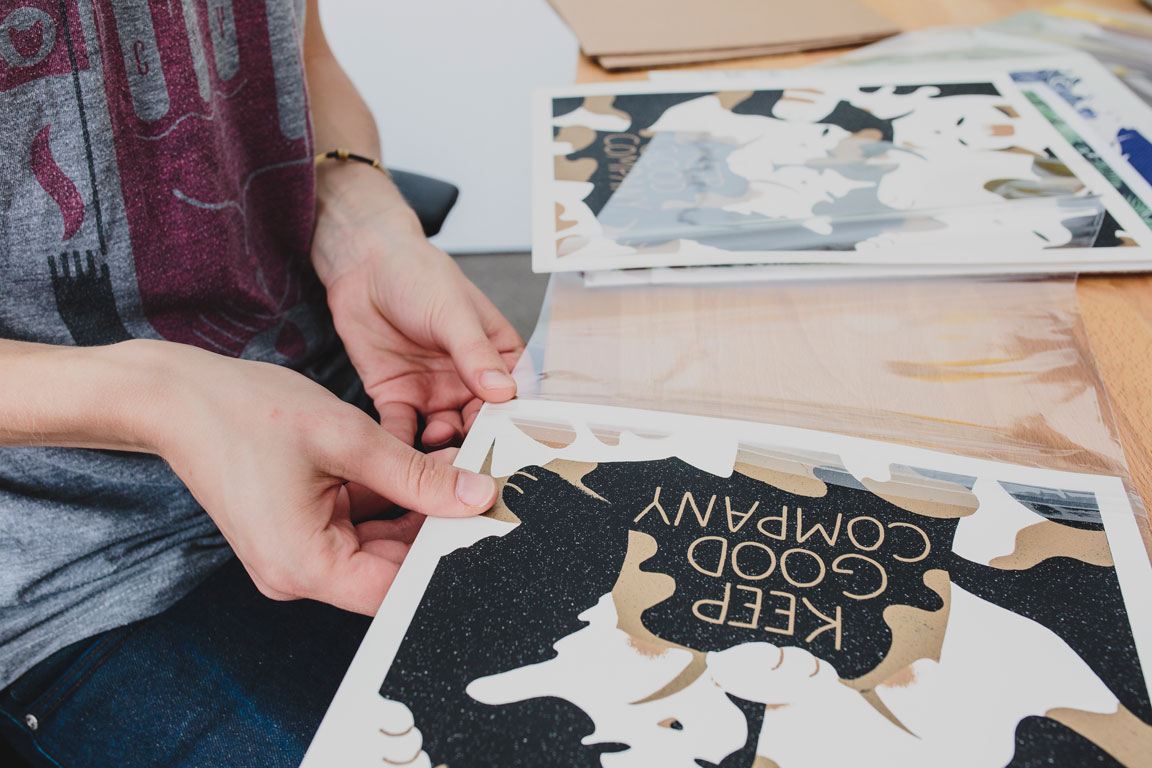 Once a new Worker Bee print is ready, it’s time to start getting it into the hands (or walls, more accurately) of as many people as possible. Since the majority of sales occur online, this is where the most effort is focused. Each print gets its own page, complete with product description, artist bio, and a behind-the-scenes video to showcase the print’s artist.

After a sale is made, all prints are hand-packed and shipped directly to the customer. To ensure the best quality possible, prints are shipped flat instead of rolled. 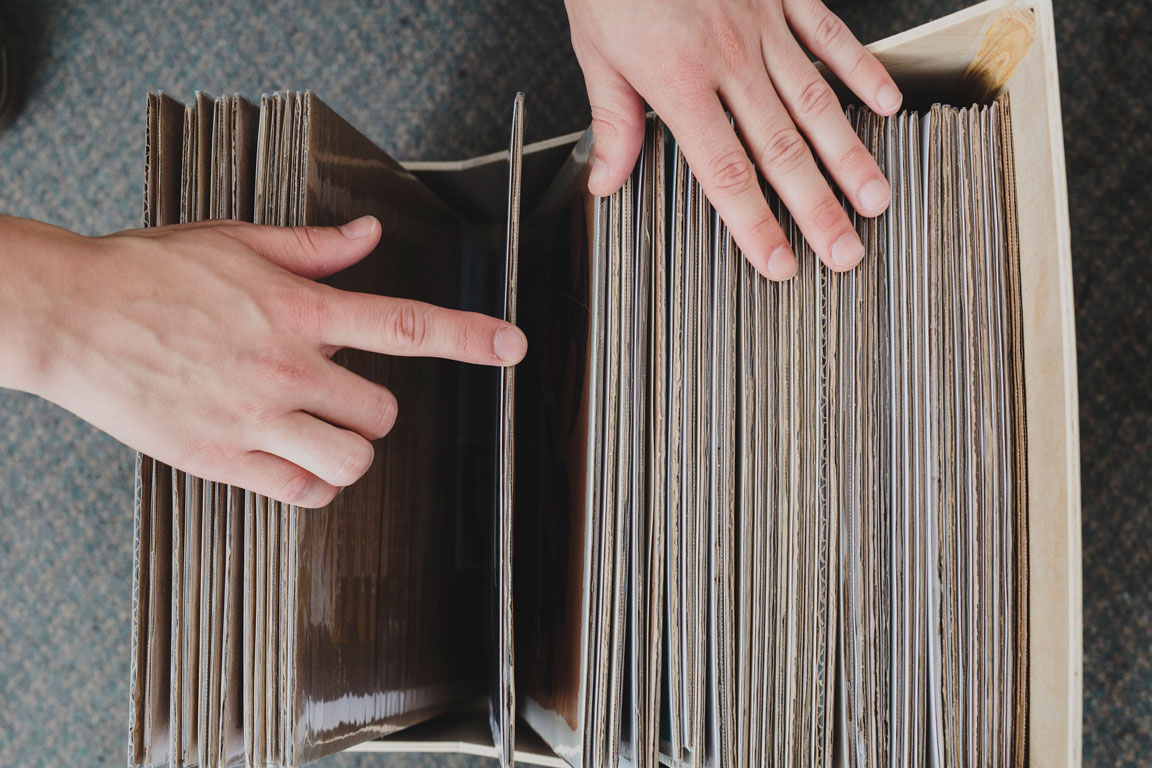 Finding a print to prepare for shipment.

In addition to online sales, Worker Bee also has its sights on physical locations. They have found design-related events — most recently Pixel & Bristle — to be a great way to put their brand in front of new audiences, and also a new opportunity to be creative with their displays. Becca has also begun pursuing wholesale opportunities to put Worker Bee prints into more brick-and-mortar locations.

At first glance, Worker Bee may seem like just a print company; however, the future of the business lies in their purpose-driven work philosophy. Eugen and Becca are working hard at developing a consulting division of Worker Bee that will help other companies better showcase whatever causes they are most passionate about.

“When you come together around a shared purpose, great things happen.” 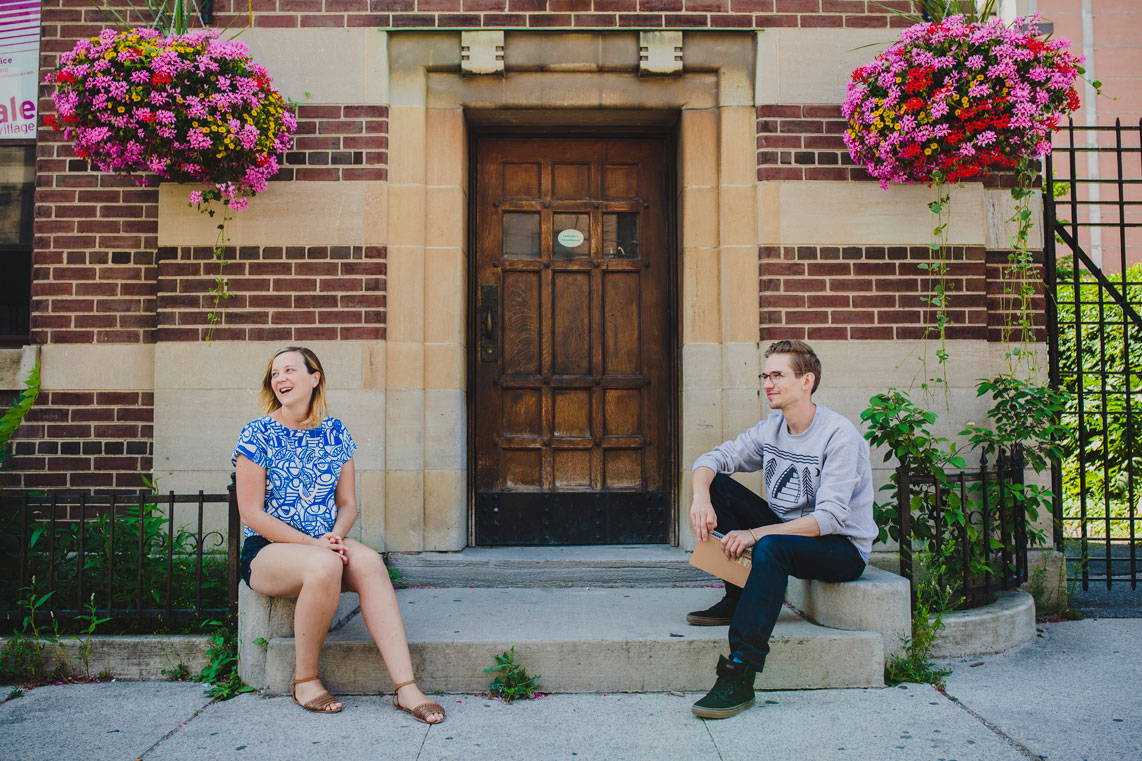 Becca and Eugen in front of the Worker Bee office in the Parkdale neighbourhood of Toronto.

This is not just something that is nice for a business to have; Worker Bee believes that companies will need to shift towards purpose-driven work to attract and retain the best employees.

“We see a future where if you don’t believe in what the company you work for does, the best workers will leave and go work for someone else,” Eugen explains. “When you come together around a purpose, great things happen: employees stay longer, it’s much easier to recruit, they’re more profitable in the long term, and investors tend to be happier.”

We’re thrilled that Worker Bee chooses Hover for its domain names. Thankfully, the feeling is mutual!

“I love Hover because we believe in making it as easy as possible for your customers to use your product,” Eugen explains. “When using other domain providers in the past, it always felt like we were fighting the service to make it work. Setting up something simple took hours of tutorials and commonly used features were buried underneath layers of menus and panels.”

“We believe in making it as easy as possible for your customers to use your product.”

“Discovering Hover was a breath of fresh air. The features I needed most were always front and centre, more complex aspects are handled elegantly and clearly, and pricing is straightforward and logical. After setting up our first domain name, we quickly transferred all of our domain names away from the services that must-not-be-named. And we’ve been converting our family, friends, and partners ever since.”