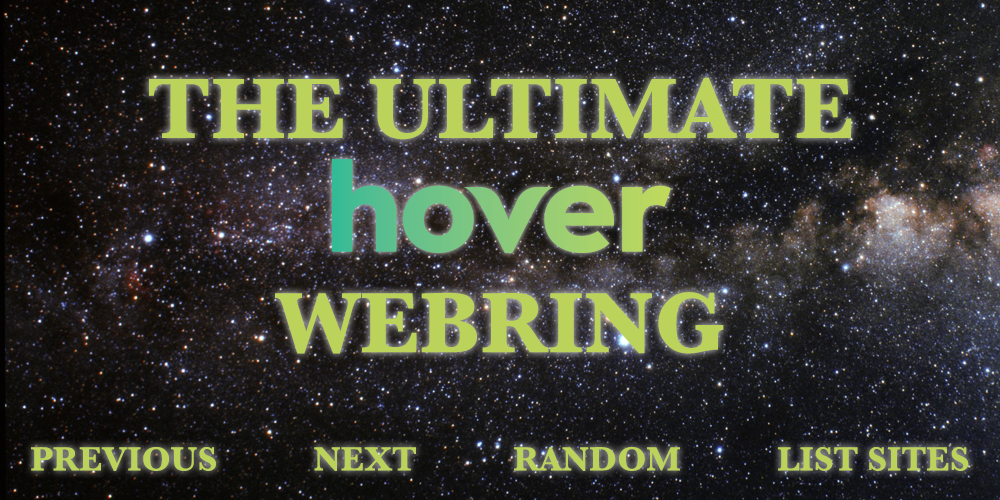 If the words GeoCities, Excite or Alta Vista mean anything to you, then chances are that the word ‘webring’ triggers a sudden pang of nostalgia. Webrings conjure up an era before “google” became a verb, when finding things online was a treasure hunt rather than a simple search query. A time when we said things like “information superhighway,” when wading through the abyss of this mysterious new “worldwide web” was an adventure.

Though they were never a perfect solution by any means, webrings were one method of making it easier to categorize and discover websites. They complimented the early DIY spirit of the web, enabling similar niche (and often obscure) websites to band together to guide visitors from one site to the next. Not everyone loved webrings but those who did fondly remember using their low-res navigation boxes to find new great places on the web.

So what exactly happened to webrings? Why are they not on websites anymore? We did a bit of digging and it turns out it’s pretty easy to identify exactly what led to their demise.

What is a Webring?

For those of you who weren’t active users of the Internet in the 90s, a webring was a box that sat at the bottom of a website, usually looking something like this:

Back then, it was much more difficult to find great content online. Websites were difficult to build, so there weren’t nearly as many options as there are today. Plus, search engines were slow to load and often didn’t provide highly relevant results. Webrings offered a solution to this problem uniquely and straightforwardly.

A webring contained a list of websites that all contained a similar theme. A single moderator — or Ringmaster — was in charge of approving and adding each website to a webring. Sites participating in a webring would then place the ring’s navigation box at the bottom of their site, which would bring visitors to whichever site was next or previous in the list (depending on which option they selected). If a visitor was on the last site in the list and clicked next, the list would loop back and load the first website in the list, in essence forming a ring of websites.

A Series of Acquisitions

The technology for webrings was owned and managed by webring.org. Webring.org was purchased by an investment firm in 1997. These investors then sold the site to GeoCities (a popular website creation tool at the time) in 1998. This was a logical new home for the company since many of the existing webrings were on websites that had been created using GeoCities.

These acquisitions were not noticeable to webrings’ users. The site’s functionality didn’t change at the time. However, it would with the next big acquisition.

In January 1999, Yahoo purchased GeoCities for $3.57 billion in stock. Whereas GeoCities purchased webring.org with a clear vision to integrate the service into its product, for Yahoo, webrings were just a bonus that rode along with their recent purchase. The question became not how to keep the service running for the existing community but rather how to incorporate it into Yahoo’s revenue-generating business model.

What followed was a series of events intended to improve the service but instead left both existing and new webrings users frustrated.

First, managing a webring now required a Yahoo account. This may have been fine if Yahoo had considered how to make the experience work for Ringmasters. Instead, the system did not keep track of who a webring’s owner was, meaning that the first person to log in and associate themselves with a ring became its new Ringmaster. This left many rings stuck, with their original owners unable to reclaim ownership because they had been grabbed by individuals who were basically squatting on them.

The next change was in direct competition with the very nature of webrings. A webring offered a free and decentralized experience. A visitor entered a webring at a random point in the list of sites and could then travel to the next site in the list, which was determined by an individual Ringmaster. Yahoo’s new navigation bar listed Yahoo Webring’s home page as the ring’s hub, encouraging visitors to come to that central location. When visitors arrived, they would then see Yahoo’s directory of webrings accompanied by ads. No longer would they visit the Ringmaster’s homepage. This took much of the emphasis away from the webring itself and the ringmaster’s role, placing the attention on Yahoo’s ecosystem instead. Since webrings were primarily a labor of love, the bottom dropped out.

Too Little Too Late

In 2001, Yahoo gave up on webrings altogether. Most of the webrings staff was laid off in 2001, and in October they sold it to Tim Killeen, one of the early engineers who worked on the system. Though Killeen intended to return the system to its former glory, by the time he took it over it was too late. Search engines were starting to come into their own, better solving the problem webrings once addressed.

Until recently, Webring.org was still up and running. It was more a relic of early internet history than the thriving hub it once was. Since then, it has shuffled off the web, only really accessible through the Internet Archive‘s Wayback Machine.

Click through to a snapshot of the site in 1999 when it called itself “the shape of things to come.”

Alas, it is instead an idea whose time had come and gone.