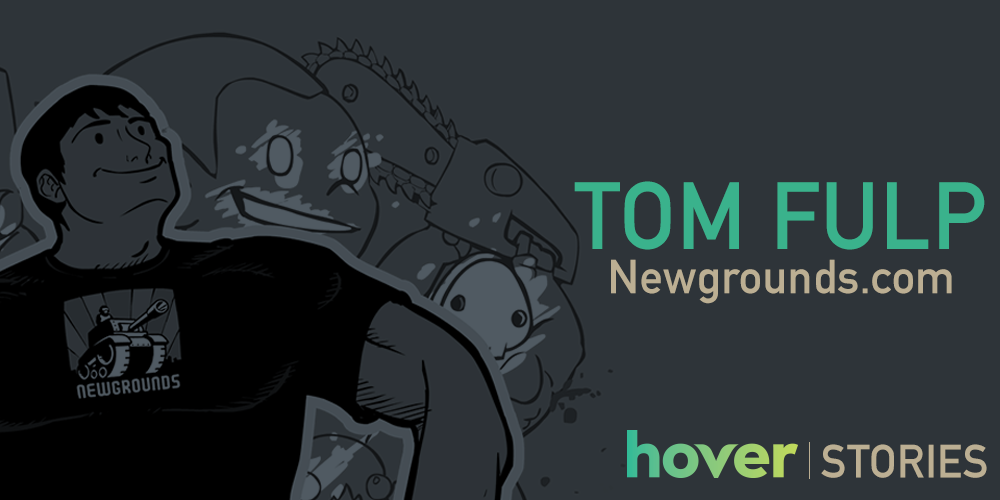 In 1995, Tom Fulp was an unassuming teenager looking for a way to share his computer games and animations with other people. Almost by accident, he would go on to create Newgrounds, arguably the Internet’s preeminent community of game designers, artists and musicians. Before YouTube, Facebook, Twitter and pretty much every other site we use today, Newgrounds paved the way for how creative people published and shared content online.

Needless to say, when we found out that Newgrounds.com is registered with Hover, we gave ourselves a well-deserved pat on the back. We then spent the next several hours “researching” the site (a.k.a. playing some games). We then reached out to Tom to see if he wouldn’t mind sitting down with us and telling his story. Lucky for us, he was more than happy to.

The Birth of Newgrounds

Tom has always had a passion for making things with computers. He would program text adventures and make animations on his Amiga, but was missing a way to share his creations with others.

“I would make videos for school and I’d try to show them to the class,” he recalls, “but sometimes the teacher wouldn’t show them because they were too obscene or whatever. Then the web came along and I was able to just make things and put them online.”

Tom began to post his games and animations on his personal website, Newgrounds, and by 1999 it had really caught on as a popular site to kill some time on. This was in part due to a new section that he had added called the Portal. The Portal was intended for his unfinished projects, but he began to include some projects that others sent him as well.

“There were other people making Flash that either couldn’t afford their own hosting or no one was finding their stuff,” he explains, “so I stuck a few people’s things in there for them.”

The problem was that once people began to see other people’s work on Newgrounds, they then wanted their work on the site as well.

“All of a sudden more people started emailing me their stuff,” he recalls. “Every day I was getting these emails from people with these files and manually making pages for them in the Portal and keeping everything updated.”

After the requests became more than he could handle, Tom brought on his friend Ross in 2000 to build the automated Portal, which allowed anyone to upload and instantly publish their games and animations. “That was the first thing on the Internet that let you publish games and movies in real-time like that.”

The Newgrounds Community is Born

With the ability to publish games, movies and later audio and art, Newgrounds established itself as the go-to destination for creative people to come together and collaborate on exciting new projects. Tom believes that users are drawn to the site because of their desire to belong to a community of like-minded individuals. “At the core of it all,” he explains, “is they enjoy making things, they enjoy sharing them and they enjoy getting feedback from people. That’s definitely the driving force of it all.”

But the Newgrounds community isn’t just limited to creators; that’s just one piece of the puzzle. After all, what good is creating something if there isn’t anyone around to enjoy it? With so many great projects on the site, Newgrounds is also a fun place to visit and explore. Many people visit the site purely to have a good time, without ever contributing a single project. This can actually directly benefit contributors to the site, since they can earn ad revenue when their work attracts many visitors.

The site also has an active community of forum users, who come to converse with a tight-knit community of other like-minded people. Despite the decline in forums as a primary way to communicate with other people online due to Twitter and Facebook, the Newgrounds forums remain active to this day. This can be attributed to the more personalized feel of forums compared to social networks. “Social networks can have a lot of back-and-forth but it can also be very one-way,” Tom explains. “There’s more ways than ever to reach out to people but it also feels more open and not as tight as it used to.”

It’s only fitting that Tom’s video game company, The Behemoth, got its start on Newgrounds. It was here that Tom met animator Dan Paladin, who he teamed up with to create the run-and-gun game Alien Hominid, initially hosted on Newgrounds. In 2003, they decided to pursue the game full-time and develop a console version.

After Alien Hominid’s success, the team considered developing a sequel, but ultimately decided to stick with their self-imposed ‘no sequels policy.’ “It just seems like a lot of times when people make sequels it almost diminishes how great the thing was as a standalone,” Tom explains, “so we’ve been trying to do it that way where we just make one great thing and not run it into the ground.”

It’s a good thing that they were set on exploring new projects, because Behemoth’s next game – Castle Crashers – would go on to be their biggest hit to date. Their project after Castle Crashers was BattleBlock Theater, and they’ve currently got a 4th game in the works.

Tom has spent the last 20 years building a strong online community, so it’s not too surprising that his key piece of advice for aspiring creators out there is to find a community. “It’s good to find people that you can share excitement for what each other are doing,” he recommends, “whether they’re people you can collaborate with or just people that share common interests.”

He also stresses the importance of always trying and keeping at it. “A lot of people don’t see the behind the scenes stuff. They think artists just came out of nowhere with talent,” he explains. “You just need to be consistent and keep making things, whether or not you can finish them or like them. Just don’t stop trying to make stuff.”

We’re thrilled to have been Tom’s choice when searching for a new home for Newgrounds.com. Thankfully, the feeling is mutual.

“We liked it immediately,” he recalls. “We liked how clean and easy the site was to use. We were with a registrar whose site had increasingly more and more dark patterns where they were trying to constantly trick you into paying money for something you didn’t need instead of just being helpful and easy to use for managing domains. We liked that Hover just made everything easy and it didn’t feel like they were trying to take advantage, so we were happy to move there.”

Ready to get working on your next idea? Get started with a great domain from Hover: