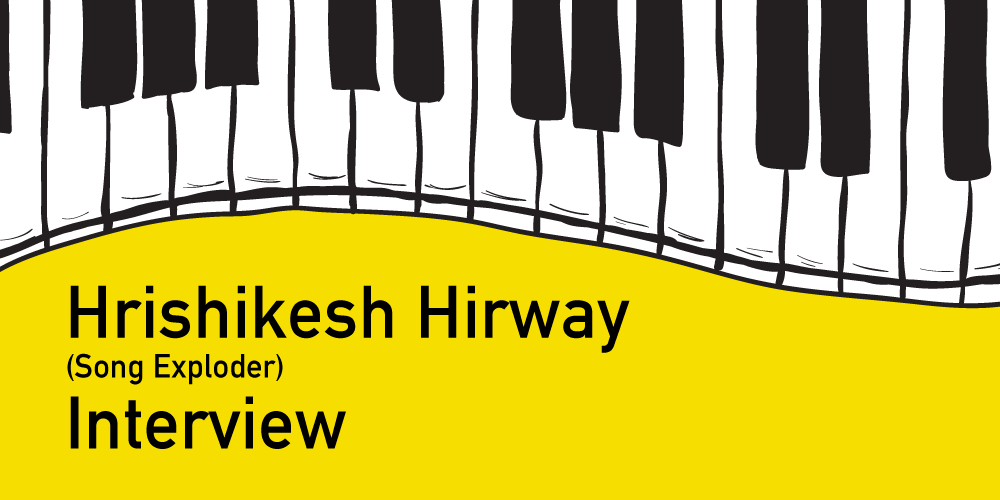 Every once in a while, you come across something that causes you to immediately smack your head and go, “why didn’t I think of that!” Hrishikesh Hirway regularly gets that very response from people regarding his podcast, Song Exploder, which invites musicians to ‘explode’ one of their songs and analyze it part-by-part. It’s the only podcast that gives musicians a forum to share their creative processes and let listeners into their minds to appreciate what went into making the songs that they love.

After meeting at XOXO Festival in Portland, I recently had the pleasure of sitting down with Hrishi to talk about Song Exploder and his love of music. Hrishi’s story is a very inspiring one that shows what can happen when you’re passionate about something and decide to follow through with it. Here’s a transcript of our conversation:

When do you remember first falling in love with music?

The first thing that I can remember with music having a profound emotional impact on me was a cassette my parents had of Lata Mangeshkar. She’s the most famous singer in Bollywood history and she’s done thousands of movies. The cassette that they had was this set of old Marathi folk songs. She produced the record herself, arranged it…It’s sort of this older world music that little kids growing up learn – they’re like folk songs. I don’t know what it was about that tape and that sound and those songs. I think I understood that the recording sounded different from stuff that I would hear on the radio.

How did you get started playing music?

I first started by playing piano. I was probably 7. My parents took me to this piano shop in the mall and there was this little room in the back where they had private lessons. We couldn’t afford to get a piano so my sister drew the keys on a piece of paper and I used to practice on that. I’m so grateful for her doing that, it was the coolest thing a big sister could do.

Who are some of your biggest influences, musical or otherwise?

I would say Portishead, Nick Drake, Yo La Tengo, and Aphex Twin. I feel like I can be influenced by everything that I hear, though. Those just happen to be people whose music I listen to the most, so they probably influence me the most.

What other projects are you involved with besides Song Exploder?

For a long time I’ve been making my own music under the name The One AM Radio and I’ve put out 4 records under that name. I also score films. I scored a documentary last year called Our Nixon. Before that I scored a film called Save the Date that has Lizzy Caplan and Alison Brie in it, and I’m working on another movie right now.

How did you get the idea for Song Exploder?

As The One AM Radio I’ve done remixes for other artists here and there over the years. When you do a remix the artist will send you the stems for the song. Having that experience of hearing a song and then getting the stems and being able to listen to all of the parts individually was like hearing the song again for the first time in a totally new way. Sometimes there would be these beautiful details that I’d never noticed in the actual full song, and I felt like “I wish other people could have the opportunity to hear this song this way, it’s so nice.”

That was sort of the first impetus for Song Exploder. Plus making my own music, I have plenty of moments where I’ve done weird things to try and get the perfect sound or capture a recording. By the time it gets into the final song, no one’s going to be able to appreciate what the origin of that sound actually is or even necessarily hear it. I thought it would be cool to have a format where musicians could actually talk about that stuff and listeners could hear the instruments and arrangements in this isolated way that gives them a deeper appreciation for what the music is and what went into it.

Are guests generally willing to come on to the show or can it be a challenge?

It’s a challenge. I think once a musician hears the show then it’s a lot easier to understand what it actually is. It’s not an easy pitch on paper. I think it loses something in the description that is much more easily appreciated when you actually listen to the final product. But it definitely takes a certain kind of personality to want to do the show and not all musicians are inclined to talk about their process or to let people hear their stems.

Who is your dream artists – living or dead – to have on the show and what song would you explode?

For me the most fun songs to explode are ones that mystify me when I’m listening to them, where I can’t pick out sounds and say “that was made by this instrument.” That’s part of what made me fall in love with Portishead when I was in high school. Plus, of course, the music is fantastic, but for a lot of it I would sit there listening and – to this day – scratch my head and say “how did they make that sound? What is that instrument?” So I would probably pick a song off of the first Portishead record, Roads. I would love to hear those strings just as themselves.

Do you ever have moments where you question whether you should keep going with Song Exploder and if so how do you overcome those feelings?

I ask myself that question daily, not necessarily with Song Exploder but the entirety of all my creative projects. I think a lot about whether it’s worth it to still be doing this and struggling every month to try and make sure I can pay my bills. But those difficulties are still so much more preferable to the challenge of working somewhere and not loving what I do. I would rather choose the particular kind of unhappiness that pursuing creative projects brings vs. the unhappiness that I would inevitably be filled with if I were doing something that was financially secure but creatively unfulfilling.

What’s the craziest experience you’ve had a result of Song Exploder?

The podcast network that I’m on, Maximum Fun, throws a 3 day comedy and music festival on a boat that goes from Florida to the Bahamas. They have a few parties and they invited me to DJ those parties. I would have never picked going on a cruise under normal circumstances, but this was a really special event where you’re on a cruise with other people but there’s this sub-group of people that are there just for this festival. So you got to have the craziness of a cruise without all the weird ‘Las Vegas mall’ kind of aspects of being on a cruise. Those cruises can be terrible and I would probably hate it under any other circumstances but getting to experience it that way was very cool. I got to swim in the ocean off the Bahamas, that was pretty amazing. And that was only because of doing Song Exploder. That was an opportunity I wouldn’t have had otherwise.

Oh and the website – which most people refer to the festival as – is BoatParty.biz, and the festival itself is called the Atlantic Ocean Comedy & Music Festival. The .BIZ is actually a thing that everybody likes to include as part of the name [laughs]. The URL for that festival is the preferred name for it over the actual formal name because they just managed to pick a great, funny & catchy URL.

I got some great feedback from Jesse Thorn when I first pitched the show to him. The pilot of the show was the Postal Service episode and the original format was that I was not in the episode whatsoever. The idea was that every episode would be introduced by the artist and I just wouldn’t appear. Jesse thought that it was important for me to at least make an appearance so that the audience knows that there’s an author behind the podcast. I think he was right about that. So I try and keep it as brief as possible but that’s why I do an intro and an outro.

Speaking of that, why do you edit your questions out of the episodes?

I’m not that interested in journalism and I’m not really interested in interviews in terms of a question and answer format. One of the impetuses of the show was to have musicians talk about their music as opposed to having musicians talk about all the other stuff. I wanted it to be about a primary source, feeling like the audience was hearing it directly from the musician themselves and that there was no buffer or filter that separated their listening experience to the process of creating what they’re listening to. I also like short podcasts and I felt like if I asked the question well and got a good answer, the question becomes unnecessary. The answer sort of reveals what the question was. I had no interest in being on the show because that’s not what it was about for me; it was about each episode has one song, one musician. It’s their voice speaking about it.

What advice would you give to aspiring podcasters or makers in general who are thinking of getting started on an idea that they have but maybe they’re too overwhelmed or scared to act on it?

I would say first that I don’t know anything and that they should probably not listen to me. I didn’t know anything about this stuff before I started and I only started 9 months ago. That being said if they did still want to listen to me…There are a lot of podcasts out there. I feel like the ones that I respond to – and this is not just about podcasts but everything from the most minor of content to large pieces – the thing that people want is new information and a new idea. So if you’re going to do something it’s important to try and find your way into it that’s unique or as close to unique as you can. I don’t know that much about podcasting, I’m not a journalist. I just like music and I like editing music and I like the process of putting this stuff together. So there’s nothing really to be scared of if you have a good idea.