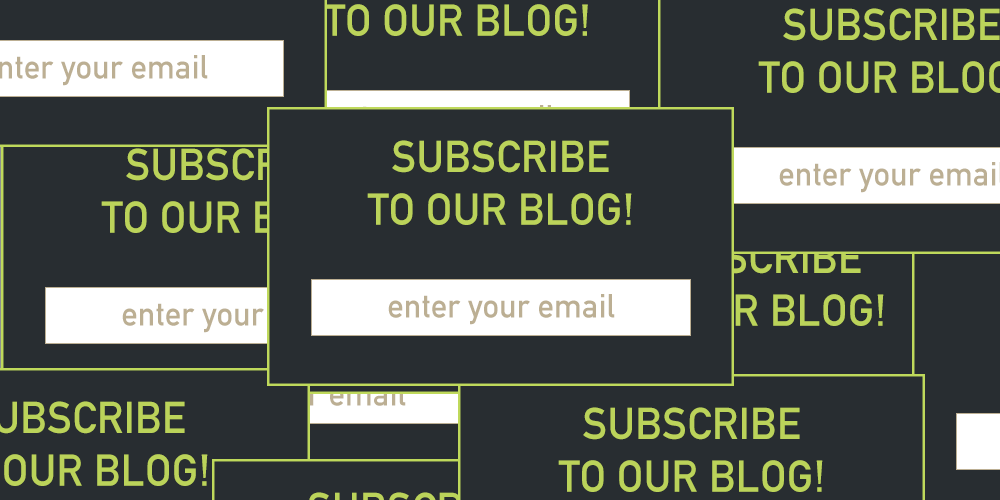 Say what you will about email being boring and outdated, but it continues to be one of the most effective ways to keep your blog’s audience interested and engaged. A tweet will often be missed if it’s posted at a time when a person is not checking Twitter. A Facebook post pretty much won’t get seen by anyone unless you pay to promote it. But an email arrives directly in the holy grail of communications: a person’s inbox.

The value of email subscribers is definitely no secret, which has unfortunately led to many websites desperately trying anything and everything to get you to hand over your information. Even worse, once they get your info, they then bombard you with “exclusive offers” that you never signed up for in the first place. We’ve all been there and know how annoying it can be. So why would you want to do that to your website?

When we added a subscription to the Hover blog, we were very careful to do it in a way that would be best for our readers. We took a look at our favourite and least favourite blogs and took note of what type of calls-to-action (CTAs) we would fill out and which ones made us want to pull out our hair in frustration. Though it’s only been 2 months, we’ve seen some pretty good success so far. We’ve been collecting new subscribers every day, and so far have only had 1 person unsubscribe. Not too shabby.

If you’re thinking about adding a subscription option to your own blog, here are some rules that we’ve followed and have worked well for our blog:

Many blogs will greet you with a popup asking you to subscribe to their newsletter before you’ve had a chance to even read anything. This doesn’t really make any sense when you think about it, since the person doesn’t know if they like your content yet. If you owned a clothing store, would you ask people to pay $30 at the door in advance for a shirt and then show it to them afterwards? Of course not — so why would you ask for an email address before a person has read a single word?

When you do ask for an email address, be noticeable but not too pushy. We use MailMunch, which is a WordPress plugin that lets us customize a form’s appearance and behaviour and then sends collected info straight to our MailChimp list. We opted for the form that scrolls up from the bottom of the screen when a reader gets 30% through an article. If a person has read that much of a post, chances are that they like it. This makes them much more likely to subscribe than if it had popped up too soon and they dismissed it right away.

Don’t Send Too Many Emails

We send one email every Friday with all of the posts from that week, which we feel is enough to give people recent content but not so much that we’ll overtake their inboxes. Other blogs will send an email whenever any article is published, and that’s fine — just make sure that people have opted into that option. Personally, I think that one email/week is the best option (provided that you post multiple times per week) but if you want to send an email for every post, give people the option to receive a weekly digest or daily updates. Otherwise, you’ll start to overwhelm the people who love you but don’t love you that much.

Nothing will drive up your unsubscribe rate faster than emails that people don’t think they should be receiving. If your subscription form offered news, opinions and tips from your blog, don’t start sending them emails urging them to get a product demo. Similarly, don’t make every other email you send them a discount code. If a person signed up to get blog posts, send them blog posts and nothing but blog posts!

The most helpful thing to do is to put yourself into your audience’s shoes. If you would be annoyed with your subscription form or the emails you’re sending out, chances are your audience will be too.