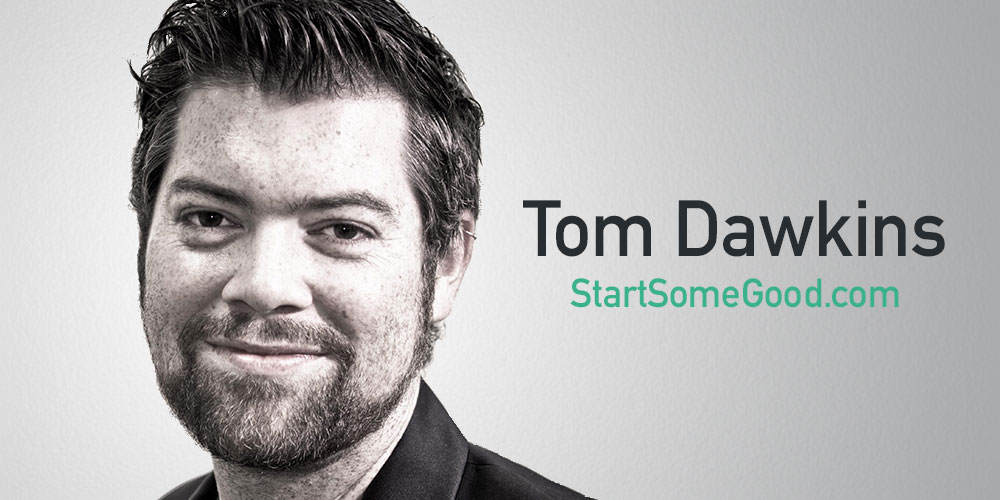 Profit and social change are terms that you usually don’t hear together. It’s typically presumed that a company that makes money does so just for the benefit of a select few while initiatives that are in the public interest are synonymous with ‘non-profit.’ Tom Dawkins, CEO and co-founder of StartSomeGood, believes otherwise.

“We’re really passionate about breaking down some of those traditional binaries between social purpose and profit,” he explains. “We think you can make a profit while also delivering a strong social purpose, and that’s what we’re aiming to do.”

StartSomeGood — a crowdfunding platform for changemakers — has helped over 550 projects raise over $6 million. By connecting social entrepreneurs with supporters, the website has proven that it is possible to help make the world a better place for others and make a decent living yourself while doing so.

Tom got involved with StartSomeGood without realizing that he was getting involved with it. In 2010, he moved from Washington to San Francisco for an exciting new position at a startup. Five weeks after this move, Tom’s friend Alex Budak called to ask Tom for advice on a new idea he had for a crowdfunding platform for social change projects.

“I couldn’t have been less interested in founding something,” Tom remembers, “but he didn’t ask me to co-found it; he asked me if I could give him some advice, which was really clever.”

Over the next few weeks, Tom became increasingly more interested in the idea, culminating with him deciding to come on board and start working on this project.

“I spent about 3-4 weeks chatting with Alex about it and found myself kind of getting obsessed with it. By the end of that period it was all that I was thinking about — waking up in the morning thinking about it, lying in bed at night thinking about it — and so I’d fallen in love with the idea, but I had become convinced that it was going to take a full commitment to get it off the ground.”

With both Alex and Tom now fully committed to the project, they then spent the next four months working towards getting the first version of StartSomeGood online.

In a race to be first-to-market, Alex and Tom spent only four months getting the first iteration of StartSomeGood online. Despite their rapid pace, they were blindsided just two days before their target launch date by an unexpected competitor. To add insult to injury, this alternative platform was even using their intended tagline: “the Kickstarter for social change.” This unexpected change in the landscape made the site’s launch all the more difficult, particularly because it reduced their potential media coverage which was overtaken by their competitor.

After launch, it took a few years to really get the site going. It was bootstrapped for the first three and a half years, growing steadily purely through word of mouth. In fact, absolutely no money was spent on marketing.

Eventually, enough funds were raised to give the site a significant visual refresh in 2014. Knowing that much more could be done, however, the team got right back to work and completely rebuilt the platform, which became the current version of the site that was launched at the beginning of 2016.

Why It’s All Worth It

“The best thing about running the site,” Tom explains, “is getting to meet with, work with, support and help great social entrepreneurs who are working really hard to do something good for the world.”

Tom’s favourite campaign so far isn’t a blockbuster that earned hundreds of thousands (though there certain are examples of those as well). He’s most fond of Jack McDermott’s story who, as someone who had overcome a lifelong stutter through speech therapy, was frustrated with the difficulty in accessing resources to help overcome this condition. He turned to StartSomeGood to raise the funds he needed to get off the ground with his idea.

“It’s no case study of the biggest amount raised, but since he got that first app out he was then able to raise VC funds and got a polished new version of the app out. I just really love that story because I think that’s what crowdfunding is all about. There’s no way Jack could have raised equity investment with just his idea, and the only gap that was preventing him from that was a surprisingly little amount of money, and he raised that money from 27 people. That’s now led five years later to a viable company that’s raised funds and none of that would have been possible if there hadn’t been a crowdfunding platform for Jack to use.”

As the co-founder of a crowdfunding platform, Tom has seen how social media has the power to change lives. He urges others to utilize this opportunity for any of their own future endeavours.

“I really believe it starts with relationships. The first thing I would do is start sharing your passion through social media and connect with other people who have that passion as well. I think it’s so amazing the opportunity we have to connect with people and identify who cares about the same things we do.”

This can be especially helpful if your idea involves social good.

“Start sharing your ideas. People keep their ideas too secret, particularly if you’re talking about something with a social change bent, but you need allies, collaborators and a community behind you. There are no lone geniuses in social change in the way you might have in other fields. I think it’s a highly collaborative field to get anything done.”

“Before too long, I would get going. I think people worry about getting things right and getting the start perfect, but I think the most important thing is momentum. I would start talking about what you’re doing and connecting, but then as soon as possible I would move into some form of action. Much as with any company, you only learn through the interaction with real people in the real world. You can’t just ask people what they think, you need to actually deliver something and see how that impacts the world.”

Ready to make the world a better place with your idea? Find it a great domain name from Hover: