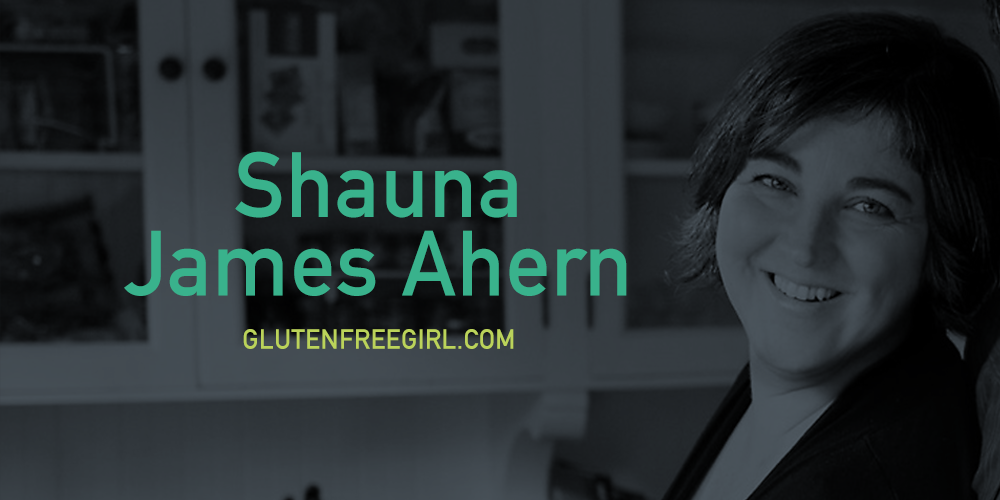 In 2005, Shauna James (now Shauna James Ahern) was incredibly sick and could not figure out what the reason was. She needed 18 hours of sleep a day, had a chronic stomach ache and was depressed. Searching far and wide for answers, her condition perplexed both her and her doctors — no one could figure out what was going on.

After months and months of feeling ill, Shauna’s friend suggested that she might have celiac disease, the most under-diagnosed disease in the United States. This was the moment that her life would change forever.

The symptoms of celiac disease are triggered when someone eats gluten, which then causes the immune system to destroy the part of the small intestine that absorbs vital nutrients. Shauna had a hunch that this was what she had and so she stopped eating food containing gluten. Within a week, she was back to normal.

Shauna has chronicled her journey through her blog, Gluten-Free Girl. At first glance it might seem like just a recipe blog, but a deeper look shows that it’s much more than that.

“Really the stories are about little moments of light, joy and being awake,” Shauna explains. “In a lot of ways it’s just a piece about being human.”

2005 wasn’t exactly the best time to discover that you have an allergy to gluten. When Shauna suspected that she had celiac disease, her doctor refused to perform the necessary tests because it seemed so unlikely that she would have it. Instead, Shauna had to seek out a naturopath to perform the tests.

In addition to the medical system being of little help, there wasn’t much support online. The information out there painted a very dismal picture of what Shauna’s life would be like from then on.

“It was all just doom and gloom,” she remembers. “People were saying things like ‘you’ll never eat in a restaurant again’ and ‘at least we have each other in this forum for support.’”

Shauna was determined to not let her allergy set the tone for her life. She had already been to her low point and now that she had found a way back she intended on staying positive. With a newfound determination, she decided to change how people felt about their gluten allergies.

“I set out to create the space that I wish had existed,” she explains.

At the advice of her friend, Shauna decided to start her own blog shortly after her diagnosis in 2005. Already a writer, this was a natural transition for Shauna. Unlike today where seemingly everyone has their own blog, it was far from a common practice back then.

“It’s pretty crazy to think about it now, but there were only around 150 people writing about food, their stories, and photographing their dinner,” Shauna reminisces. “So when I started I never imagined anyone reading it. It was really just a place for me to write.”

Shauna might not have anticipated getting an audience, but after about a month she started to receive comments from strangers. Pretty soon, it started to become clear that people were actually reading her posts and enjoying them.

“After I had been writing for 4 months, a woman wrote in and said that her child had been diagnosed with celiac, and she was making every single thing on my blog,” Shauna recalls. “I then thought, ‘wait, what?!? Somebody’s actually making these things?’”

That was the defining moment for Shauna when she realized that she was on to something. If people were going to read her writing and cook her food, then she better start doing the best job possible.

Shauna has used her blog to not just share delicious recipes but insights into the rest of her life as well. Notably, she began writing about Daniel Ahern, a remarkable chef that she had met. It didn’t take long for the two to fall in love, which Shauna chronicled publicly on the blog. Before long, Daniel joined Shauna on the blog, which expanded its full name to be “Gluten-Free Girl and the Chef.”

By sharing her personal life openly on her blog, Shauna was able to develop a meaningful connection with her readers over the years. When she and Daniel were getting ready for their wedding, Shauna mentioned on the blog that she would love to get married in a pair of red cowboy boots. A few weeks later, Shauna received a pair of shiny new red cowboy boots in the mail from one of her readers.

Years later, Shauna was due to give birth to her daughter and told her readers that she would let them know that the baby had arrived safe and sound. Unfortunately, the baby had complications breathing. When readers didn’t receive an update after a few days, they started asking if everything was ok. What ensued was an overwhelming outpouring of support, with other mothers sharing their similar experiences and assuring Shauna that she and her baby were going to be fine. Thankfully, they were right and the baby survived!

Of that particular experience, Shauna notes, “that still moves me to tears just thinking about it.”

Readers had also expressed a lot of interest in her all-purpose flour blend which she uses in many recipes, so they turned to Kickstarter to help turn the recipe into a product. 1,563 backers ended up pledging $92,612 to help fund the project, and you can now buy the flour from their website!

As Gluten-Free Girl has evolved, so too have Shauna’s many roles. “I started off as a writer, then became a recipe developer, then a baker, then a flour developer,” she explains. “I’m also Chief Strategist, email answerer — nobody gets to do just one job when you do this!”

Though there are a lot more bloggers now than there were when Shauna was getting started, she still recommends going for it — but only if you’re in it for the right reasons.

“Don’t start a blog thinking it’s going to lead anywhere else other than writing on your blog,” she cautions.

Shauna believes that the best way to start a blog is by easing into it in order to be sure that it’s something that you really want to be doing.

“I always tell people just write a blog and keep it for 6 months without telling anyone about it,” she explains. “It’s really hard but you need to make sure it’s a space you want to inhabit and that you want to keep coming back to.”

Ready to start your own blog? Get it a great domain name at Hover!