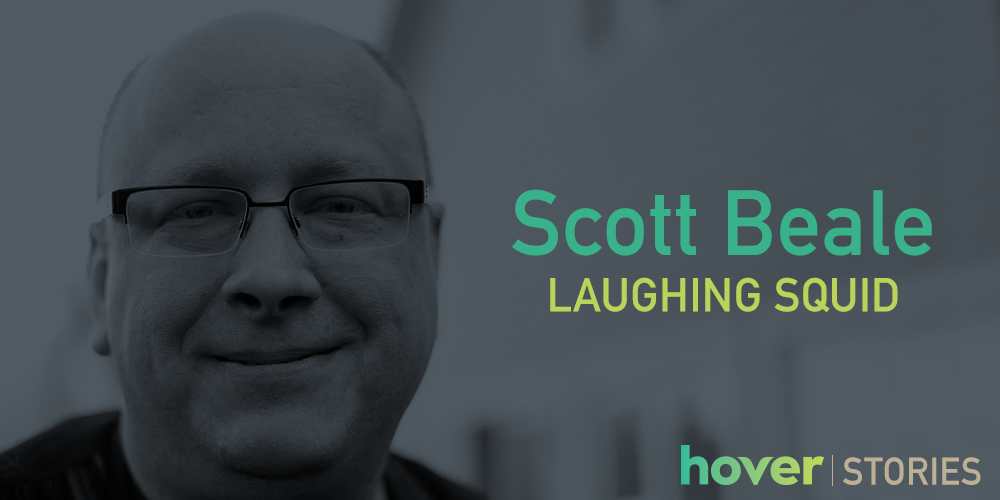 Since its inception in 1995, Laughing Squid has gone through many transformations. Starting off as a film and video production company that made documentaries, the company has evolved over the past 20 years into a popular blog and web hosting service.

Scott Beale, Laughing Squid’s founder and ‘primary tentacle,’ likes to keep things vague so as to avoid prescribing what the future of his company will be. As he puts it, “I purposely don’t have an explanation of what Laughing Squid is.” It is this attitude has helped his company adapt, survive and stay relevant in the ever-changing world of the Internet.

As frequent readers of the Laughing Squid blog, we were delighted to discover that laughingsquid.com is managed through Hover! We took that information as an opportunity to sit down with Scott and learn about the Laughing Squid story and how he managed to create and perfect his Webby Award winning site.

Scott moved from Dayton, Ohio to San Francisco in 1992, where over the next 18 years he would witness the rise of the Internet and the companies at the heart of it all.

During these early years, Scott spent his time producing documentaries about the surrealist painter Alonso Smith and The Cacophony Society’s Portland Santacon ‘96 event. In order to release these films, he first needed a company name to publish them under.

“I needed to set up a company to handle all of the expenses associated with my documentary” Scott explains.

While Laughing Squid was getting its start, Scott’s day job was at a company in the South Park neighbourhood of San Francisco, which has been home to some of the biggest names in tech including Twitter, Wikimedia Foundation, Wired, MySpace and Google Ventures. With all of this excitement happening around him, Scott soon found himself at the center of it all.

In 1996, Scott started an email list called The Squid List, which he used to promote events in the San Francisco Bay Area. The Squid List amassed a large number of subscribers over the years and was one of the best ways to discover which must-see events were coming up.

These events were also a great opportunity for Scott to expand his social network (before MySpace, Twitter, Facebook, etc.) and form friendships with other artists. Many of these artists were not particularly tech savvy, so Scott began helping them out with PR and web design. Naturally, he did this under the Laughing Squid brand as well.

As Scott was building websites for his friends, he needed a place to host them. Not satisfied with what he was finding out there, he decided to start leasing servers and launch a hosting service of his own in 1998.

The web hosting component of Laughing Squid has grown organically over the years into a viable revenue source for the company. For Scott, this has been a very rewarding experience that has been great for both the company and its customers alike.

This slow and steady growth is due to Scott’s decision to not aggressively grow the company but instead let it happen naturally.

“We kept it a reasonable size because the bigger hosts have to get a certain number of signups just to maintain their company,” he adds. “We’re not going to spend a bunch of money on advertising. It grows at its own rate and it works.”

With a decent amount of traffic to the Laughing Squid website due to the email list and web hosting, Scott decided to launch a company blog in 2003.

Unlike other companies who use a blog for marketing announcements or content related to their industry, the Laughing Squid blog is completely independent of the web hosting service. Instead, Scott and the blog’s other contributors curate great content related to art, culture and technology.

“We were able to do the blog and not have to chase things like pageviews because it was income from the hosting company that allowed the blog to build up over time and become its own self-sustaining entity,” Scott explains.

Laughing Squid’s approach of having multiple independent companies under one umbrella has given the company a unique chance to only post content that is meaningful to them and that they truly believe in. This has resonated really well its constantly growing audience, who have expressed their gratitude to Scott and his team.

“People do appreciate it,” says Scott. “We’ve had people contact us and actually thank us for not insulting their intelligence.”

Laughing Squid and Hover are pretty similar in some ways: we both provide services that give you exactly what you need and don’t waste your time with everything else. Laughing Squid offers web hosting but stays out of the domain name component — something that is quite rare for web hosts. As such, they need a great place to send their customers when they ask where they can get a domain name.

For Scott, Hover is a natural place to send his customers. We just sell domain names and email. More importantly, we don’t offer web hosting, which would be something that would compete with his business. The reasons why he recommends us are the same reasons why he became a customer many years ago himself.

“I like the uncluttered front page, the fact that you’re not trying to upsell everything, and that you don’t have to go through 20 pages when you sign up.”

Have a great idea for your own project? Get it a great domain name from Hover!