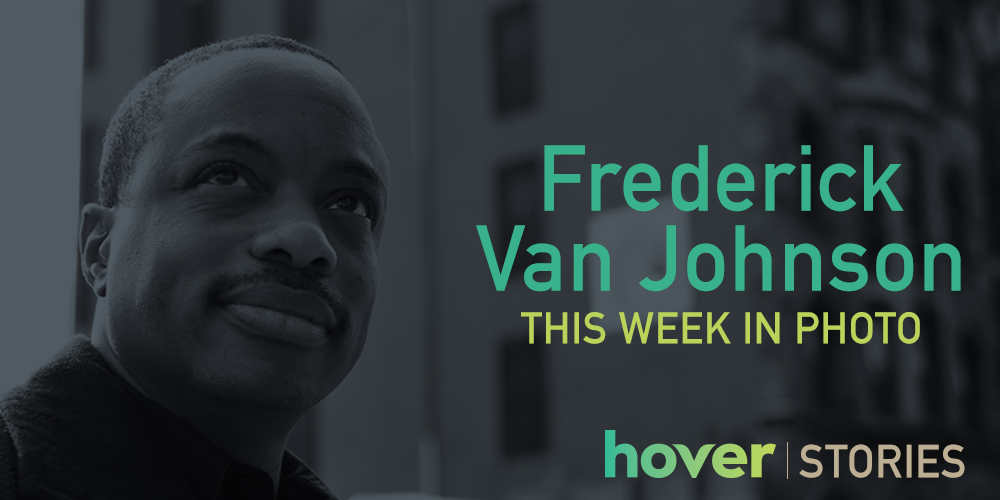 When Frederick Van Johnson enlisted as a photographer in the United States Air Force’s Combat Camera unit in 1988, he developed an affinity for photography that would change the course of his life forever. He would go on to work at some of the biggest companies in tech – including Yahoo!, Adobe and Apple – helping to shape their photography products that we all know and love today.

As great as these experiences were, they were all preparation for his biggest endeavour to date: This Week In Photo. Part podcast, part network, part training center, TWiP is the go-to source for aspiring and professional photographers looking to both develop and refine their craft. In turn, Frederick juggles multiple roles: entrepreneur, marketer, photographer, speaker and countless other responsibilities that come with running your own business.

“It’s going well but I have more grey hairs because of all of this. But other than that it’s really fun,” he jokes.

When we discovered that Frederick uses Hover to manage his many domain names, we were of course excited and wanted to learn more about his story. We recently sat down with him – or rather video chatted with him from his iconic home office seen in his video podcasts – to learn more about how he got to where he is today, as well as the exciting places that he’s heading.

Frederick got his first taste of photography in the U.S. Air Force where he photographed, directed and designed multimedia projects for military officials. His nearly 8 year tour of duty enabled him to really get to know his way around a camera, and sparked a passion for photography that would only grow as the years went on.

“That’s where I learned photography, learned to love light, and got bitten by that creative photographic bug,” he reflects.

After leaving the military in 1996, Frederick relocated to Silicon Valley. His first job was at the San Jose Mercury News, where he became the newspaper’s Chief Multimedia Producer. It was here that he learned more about the rapidly growing tech industry, which began to capture his fascination.

“Working at the newspaper I saw: a) the decline of newspapers, and; b) we were reporting on these crazy tech companies that were doing all this cool stuff,” he explains. “I wanted to go and join one of those companies. I wanted to be making tech news, instead of helping to report on it.’”

Working in the Valley

The next chapter in Frederick’s career consisted of establishing himself as a prominent marketer in the tech industry.

His first position was at Yahoo! where from 1998-2002 he was initially a Senior Producer, and was responsible for the company’s entry into mobile content delivery. Specifically, he started what later became Yahoo! Mobile. Later, he served as Creative Director and on-air host for Yahoo!’s media property Yahoo! FinanceVision. There, along with being on-air talent, he focused on the look and feel of the company’s streaming video efforts.

In 2009, after a year and a half at Adobe, Frederick received the first major blow to his career. “Adobe was one of the first companies during the economic slow-down to have a massive layoff — 800 people in one day!” he recalls. “It was just like boom, 800 gone, everyone was carrying boxes and crying, it was a really emotional day.”

Though this was quite shocking, it ended up being a blessing in disguise. While he was busy building a successful career as a marketer, he had been neglecting his true passion — photography. “I was seeing myself moving further and further away from my creative roots and photography,” he explains, “so I decided it was time to move back into photography.

This Week In Photo

It was around this time a few of his friends started a photography podcast called This Week In Photo (TWiP). When Frederick found himself with some free time on his hands, he realized that the time was right to rekindle his love of photography. So, he joined TWiP as a co-host, and would eventually take over and drive the operation altogether.

Regarding how his mind works, he says, “it’s kind of like a Reese’s Peanut Butter Cup, where you have the chocolate and the peanut butter together. I had marketing and photography skills, and I wondered, how could I put these together to make something that’s a viable business as well as help people.’ So over the years I grew TWiP from being just a hobby podcast to a profitable business and media property to be reckoned with!”

Under Frederick’s helm, TWiP has evolved from a single podcast to a network of podcasts covering the diverse world of photography. In total they have around 25 staff, and have an additional 7 new shows slated for release within the next 6-7 months.

“The This Week In Photo site is kind of like an ‘incubator’, because many of  the shows are new and full of promise,” he explains, “and as they grow, they’ll get their own legs and break off to become separate properties themselves, each with its own community of fans, advertisers, content, etc — away from the mothership.”

Over the years, Frederick has hosted over 400 shows that have been listened to millions times all over the world, and he has interviewed countless photographers and industry leaders. Along with his frequent speaking engagements and his seat on the Brooks Institute’s Board of Trustees, this has all cumulated into establishing himself as a powerful thought leader in the photography world – something that he is both surprised and honoured by.

“Podcasting is kind of a weird off-shoot of celebrity,” he explains. “It’s not real ‘Hollywood’ celebrity. It’s an accessible kind of celebrity, because people know that you’re just a normal person, and you are using the exact same gear that they may have. I’m just another guy that you happen to have heard repeatedly. But that repetition somehow equals importance. It’s an interesting nuance.”

While we had Frederick’s attention, we chose to be a little selfish and ask why he uses Hover for all of his domain names. Luckily he didn’t mind, and in fact had many great things to say about us.

“I chose Hover because the company struck me as the ‘Apple’ of domain registration in terms of the transparency and simplicity of how it all worked together,” he reflects. “Initially, I had domains in several different places, and if I recall correctly Hover had a valet service that basically facilitated moving my other domains over to Hover for me. And I was like ‘hallelujah!’”

Coincidentally, he had even been recommending us to his sister that very morning.

“This morning, I received an email from you guys about some new top-level domains that are becoming available,” he explains. “My sister has a cosmetology business and I explained to her that she should register a .CARE domain name for her business. She said ‘I have no idea how to register that, tell my nephew to do it!’ and I said, ‘no, just go to hover.com and just do it’ and I sent her the link and she’s doing it right now!”

“I wouldn’t have felt comfortable sending her to some other services. Instead, I likely would have said, ‘you know what, let me just do it for you.’ But with Hover, I feel confident sending my sister over to register her domain.’”

Need a new website? Search for a domain name ending with .COM, .PICS, .PHOTOGRAPHY or any of our other 300+ top-level domains: