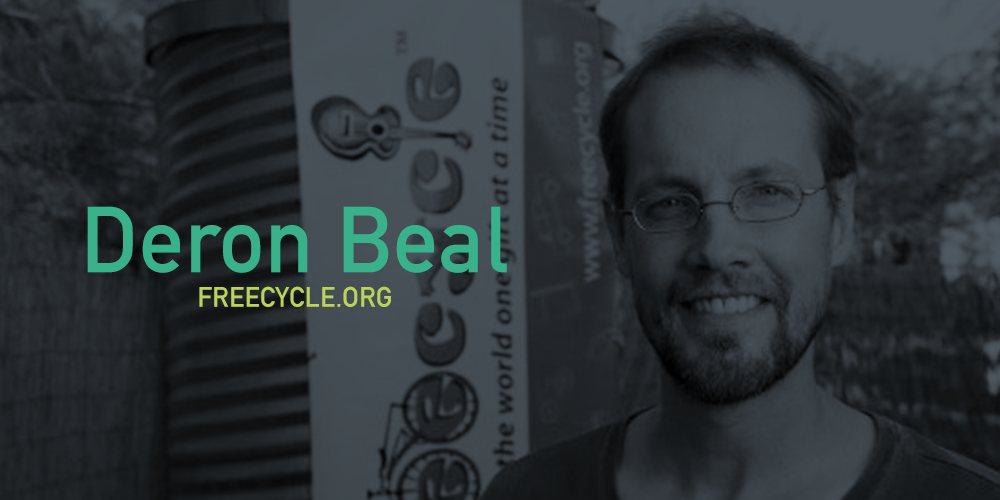 Everyone has a bunch of junk lying around their house that they have no idea what to do with. Maybe it’s an old iPhone that you were going to try and sell but 3 new iPhones have come along since. Maybe it’s a stack of old textbooks from school. Or maybe it’s an ugly chair that clashes with everything in your living room. Or a broken food processor. Or a…you get the idea.

Deron Beal has set out to solve this problem with his website Freecycle.org, which has helped many unwanted items find new homes — 32,000 items a day, to be exact.

“Freecycle’s mission is really to make it easier to give something away than to throw it away,” Deron explains.

With online communities set up all over the world, 9 million members have used Freecycle to breathe new life into things that would have otherwise ended up in landfills. In the past year alone, if you were to pile the items gifted through Freecycle into garbage trucks, it would be 15 times the height of Mt. Everest!

Where The Idea Came From

In 2003, Deron needed to get rid of a mattress but couldn’t find a good way to do so. The mattress was relatively new and in excellent condition, but no one seemed to want it.

“I tried Goodwill but they don’t take beds,” he recalls. “I then tried my friends, but none of my friends needed it.”

The only other option available to him at the time was to throw it away, something which made no sense to him.

“The alternative was to rent a truck, haul it to the landfill, and pay money to throw this thing into a hole that you pay tax dollars to dig in the first place. That’s just insane!”

It was that moment when the idea hit him — what if there were a place online where you could find people that would want things that you didn’t want anymore but still had some life left in them?

Over the years, Freecycle has expanded to over 5,000 local groups all over the world, with over 7,000 volunteers helping to keep things running smoothly. Of those, 100 volunteers put in at least 20 hours per week.

“On that level it’s a very big organization but on another level it’s tiny,” Deron explains. “We’re a charitable non-profit with a staff of 2 people and 1 private contractor. So it’s a juggling act, to be sure.”

Deron partially attributes the success of Freecycle to the unexpected joy a donor gets after finding their “useless” items a new home.

“It’s a paying-it-forward effect; this warm and fuzzy feeling of helping someone out when you were really just trying to make your own life easier.”

The items that people have gifted through Freecycle range from common household items to literally a house — that’s right, someone actually posted a 100 year old house on Freecycle!

Others have used the site for more charitable purposes. After the 2010 earthquake in Haiti, a woman collected supplies via Freecycle and sent them in a container to a Haitian orphanage. A kid used the site to collect unwanted guinea pigs and set up an orphanage for them. A 95 year old man collects kids’ bikes on the site and gives them back to the community through the site as well. And there are countless other examples popping up every single day.

Helping To Fix A Big Problem

By making it easy to find people who want your unwanted items, Freecycle is playing a big role in diverting items from landfills. In doing so, they’re also cutting down on the need for new items to be produced. This is one of the biggest sources of waste that we produce.

For example, buying a new sofa needs 20 times the amount of materials in the sofa in raw materials. If your sofa weighs 100 pounds, 2,000 pounds of cotton, steel, wood, diesel, coal and so on are used to produce it. By collecting someone’s unwanted sofa, you’re helping the planet by saving raw materials — not to mention saving the money needed to buy a new sofa!

Before going all-in to pursue whatever your passion is, Deron recommends easing into it to make sure that it will be viable.

“Keep open to your passions, pursue them as you can on the side, and give them time to flower before quitting your day job,” he says.

It’s also important to get help wherever you can. Freecycle has thousands of volunteers all over the world that help to operate the site within their local communities. The site also runs advertisements in order to help pay the bills.

And of course, Deron also recommends purging yourself of your unwanted clutter on Freecycle! “You see this community feeling that evolves once you get more involved in giving away all that crap you don’t need that’s filling up your closet. It’s liberating.”

Get started on your big idea by getting it a great domain name from Hover!