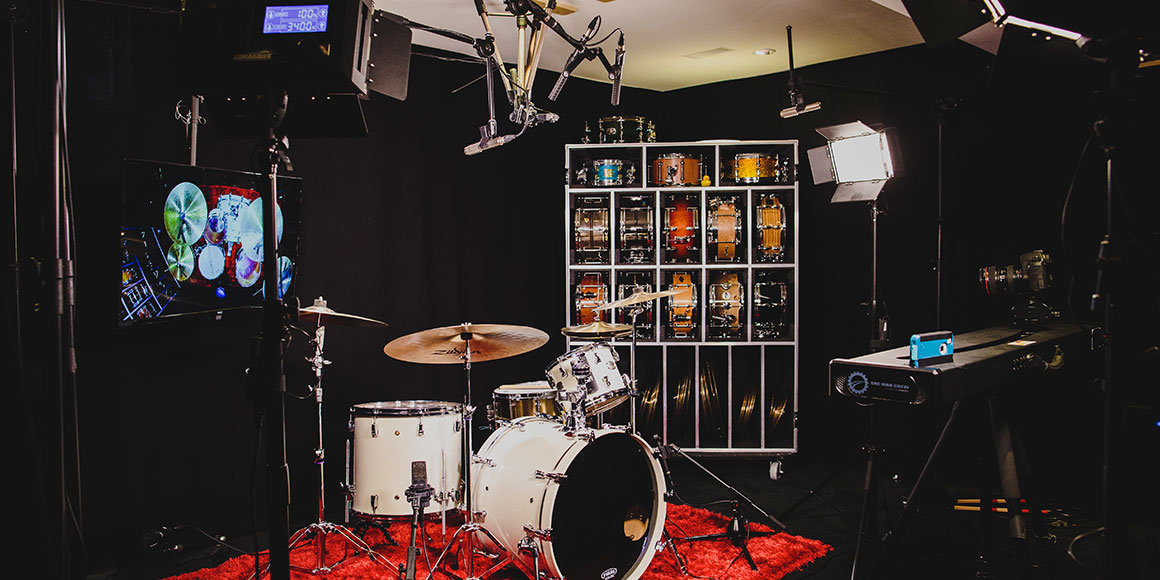 Thanks to YouTube, it’s now easier than ever to find detailed online tutorials on how to do pretty much anything, including playing the drums. Finding a way to navigate through all of this content to find what’s best for you? Not so much.

180 Drums is bringing clarity and direction to learning drums online by producing high-quality videos taught by some of the world’s best professional drummers. With just over a year in operation, the website is clearly onto something, growing its community to over 150,000 drummers without spending a dollar on advertising. 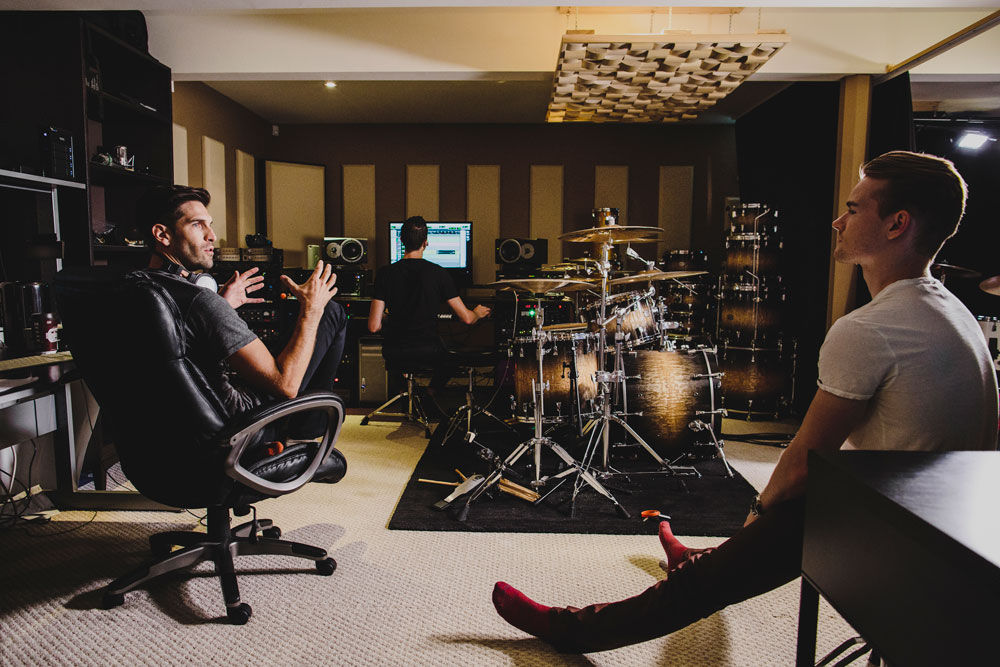 Inside the 180 Drums editing room.

When Jake Nicolle graduated high school, he was faced with a tough decision: go to college or go on tour playing drums for Frankie Whyte and the Dead Idols. Although he was having an amazing time travelling the world and getting to play the drums every day, he felt like something was lacking in the form of continuing his music education.

It was around this time that he met Steve Augustine, the drummer for Thousand Foot Krutch and eventual business partner, who also had a similar craving for access to lessons that could help him further develop as a drummer. As the two became better friends, their desire for an online source for drum great lessons only became stronger over time.

“We decided right then and there to craft the vision for 180 Drums, which was creating the highest quality drum lesson experience rooted in community,” Jake reflects. 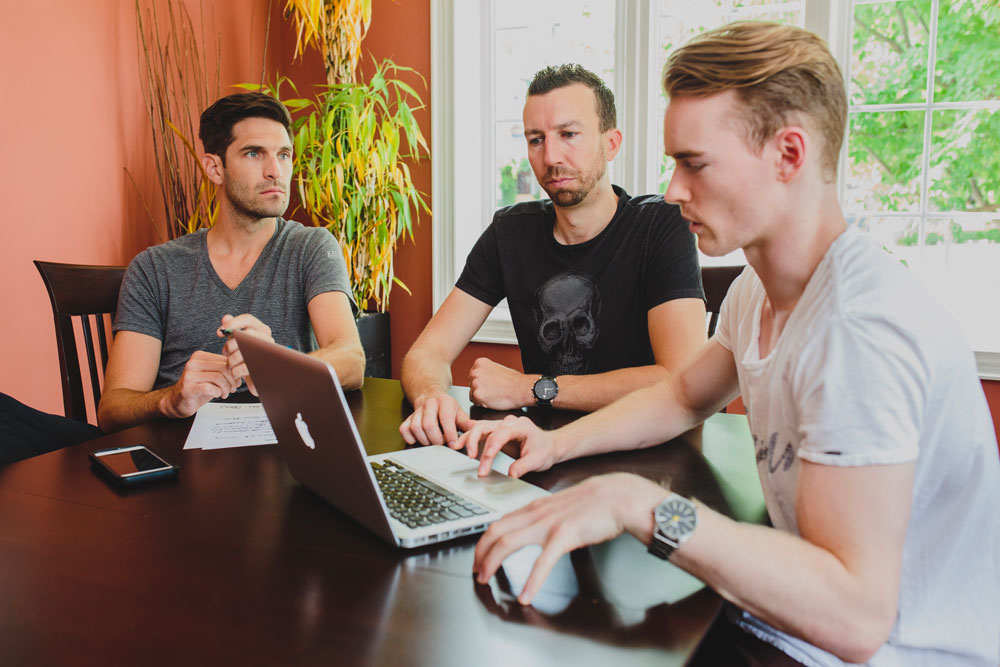 180 Drums is operated out of Grimsby, Ontario, Canada, in a video and audio recording studio built in Steve’s basement. The 180 team brings in professional drummers for world-renowned performers including Stevie Wonder, Ariana Grande and Drake, who Jake sits in with on-screen to deliver engaging and insightful lessons.

Unfortunately, the team learned that they liked the two-person format the hard way. After recording and editing 180 ten minute videos (1,800 minutes total!) with only Jake providing the lessons, they brought in their first guest instructor and liked the format so much better that they made the decision to scrap all of the content they had worked so hard developing and start from scratch.

“When it comes to how seriously we take quality, we had our first guest instructor come in, looked back at that footage and said our first videos don’t cut it and threw them all away — tens of thousands of dollars of time in the studio. That was a good learning lesson to just make sure you do something right the first time,” Jake explains. 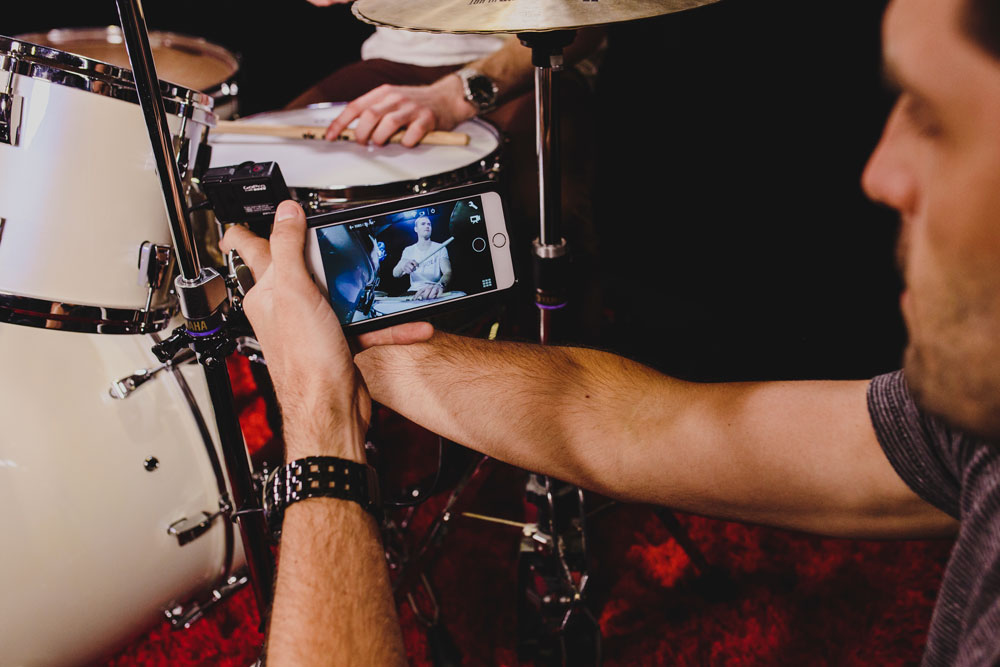 Setting up one of seven HD cameras for an upcoming recording.

In addition to making the videos more fun to watch, the two-person format helps the instructors provide the best lessons possible.

“Just because someone’s good at something doesn’t mean they’re good at teaching it,” Jake explains. “We really come alongside our instructors and make sure that regardless of their teaching ability or their understanding of what they’re playing, that we understand it and are able to communicate it.”

The result are easy-to-follow drum lessons, complete with practice videos and notation, to consistently provide students with something new to learn. The videos are also categorized into tracks based on difficulty level, and students are encouraged to keep learning by earning points for every completed lesson. Lessons are also available whenever inspiration strikes, since the website is optimized for every device. 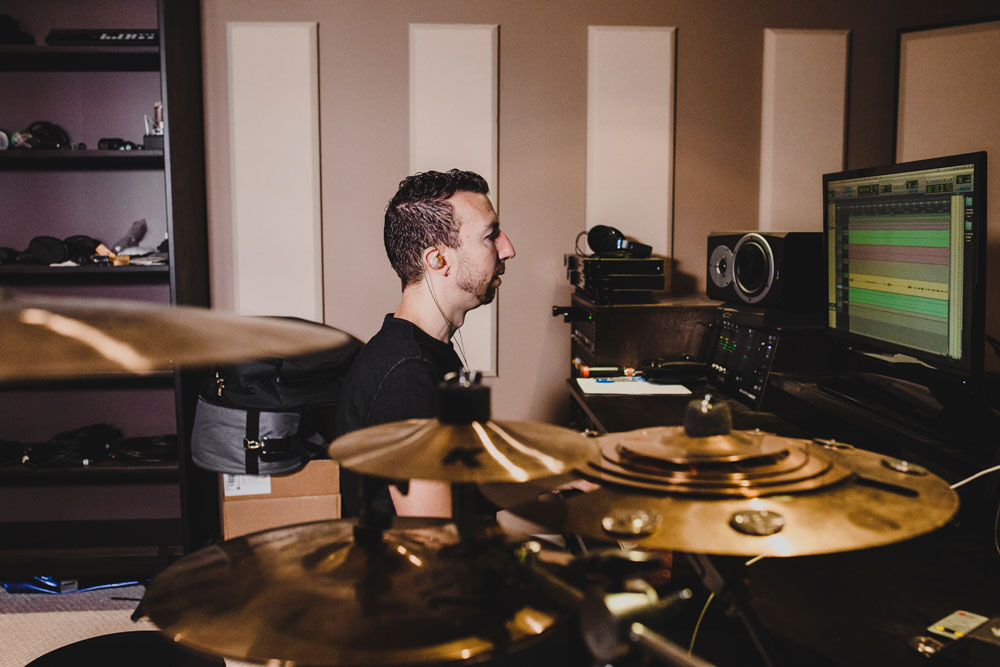 Steve editing a drum recording in his basement studio.

Finding a name was no easy task. It was not enough for the name to sound good: it also needed to have the corresponding domain name and social media handles. “I just wanted everything to be as clean and articulate as possible,” Jake explains.

As a result, Jake and Steve went through approximately 60 names before finally landing on one they not only liked, but had an available domain name and social profiles: 180 Drums.

“180 Drums comes from the fact that we wanted to turn the industry of taking drum lessons upside down,” Jake explains. “We liked that it was really simple, it perfectly fits our branding and our culture, and that it spoke to the idea of flipping things upside down.”

The name has also afforded some unexpected benefits as well. “Any time we’re featured in something, if it’s alphabetical then 180 is always first,” Jake remarks. 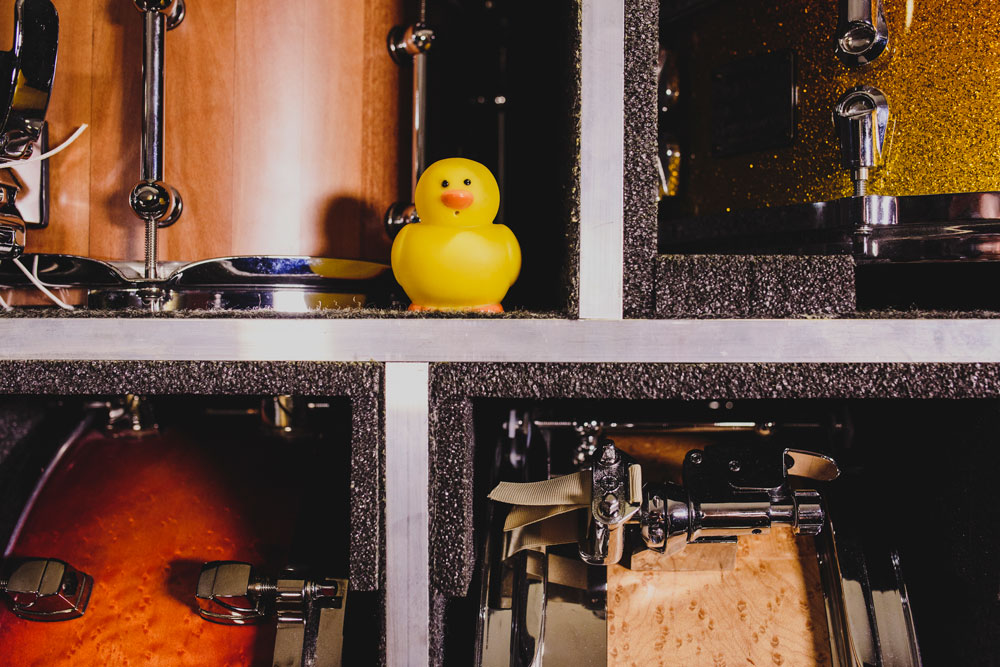 At the heart of 180 Drums is its community: the #180Family. Subscribers use Facebook and Instagram to ask questions and share tips. They even post videos of themselves playing so instead of trying to describe their questions, others can see exactly what needs improving and offer suggestions meant for that specific individual.

The community also has the power to impact people in profound ways. One standout example is Jim, a member of the #180Family who has Parkinson’s disease. Jim frequently posts videos of himself playing, even when his shaking is at its worst and he’s barely able to play. Others will chime in and offer words of encouragement and tell Jim how much of an inspiration he is.

One community member that watched Jim’s videos was Aaron Gillepsie, a 180 Drums instructor and drummer for Underoath and Paramore. When Underoath was passing through Jim’s hometown, Aaron invited Jim to the concert where Jim got to soundcheck Aaron’s drumset and even got to keep Aaron’s cymbals after the show.

“It’s truly a family vibe,” Jake reflects. “We do life together, we play drums together, and we help each other overcome challenges.” 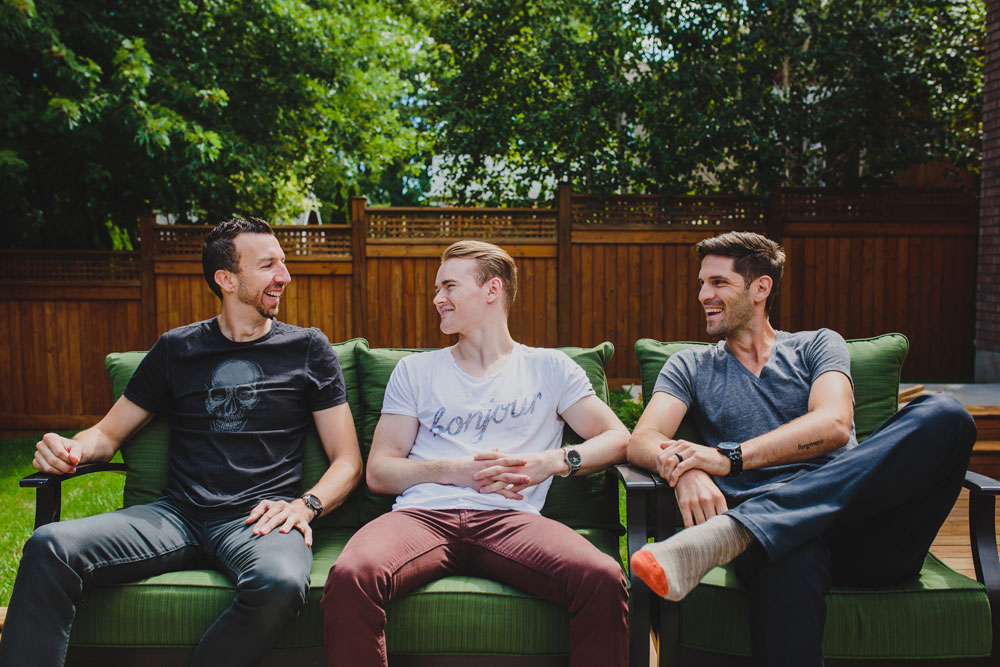 Taking a break from editing in Steve’s backyard.

When providing access to online lessons anytime, anywhere on any device, it’s crucial for 180 Drums’ domain name to be up and running at all times. Jake, Steve and the rest of the 180 Drums team trust Hover with their domain names because for them it’s all about great customer service.

Jake puts it rather simply: “I’ve had some of the best experiences with customer service on a website ever.”

Specifically, it was a chat conversation that Jake had with a Hover team member that won him over. Jake needed to transfer a few domains from Steve’s personal account to a new business account, and after a few minutes, the Hover support agent told Jake that everything was set up and ready to go.

“Our experience with Hover has been great,” Jake elaborates. “We’ve never had anything break down, everything’s been flawless. And when it comes to adding emails, when it comes to changing things like nameservers, whatever we’ve had to do it’s just been so effortless.”

Ready to get started on your big idea? Find it a great domain name from Hover!