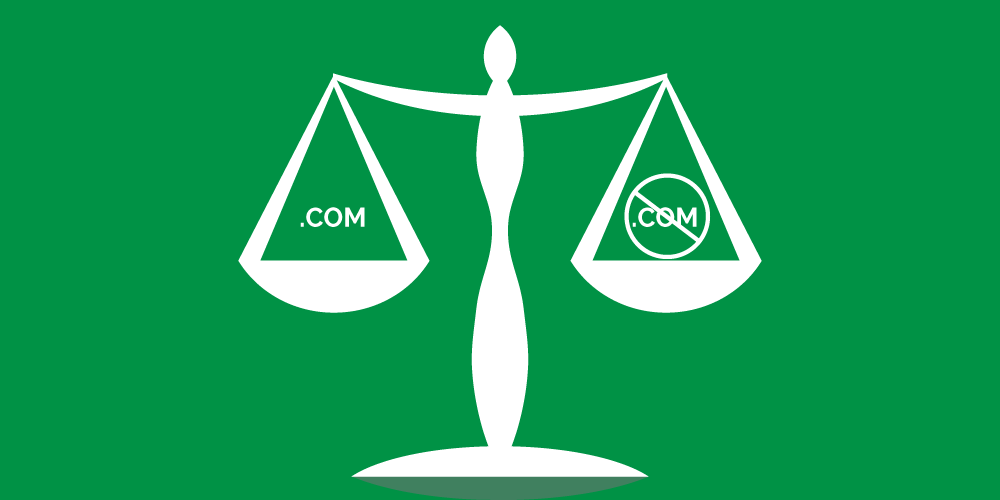 There’s no question about it: .com is by far the most popular top-level domain (TLD) on the Internet. It’ll probably be a long, long while before it moves from its #1 spot on our weekly TLD rankings…if it ever happens at all.

That being said, the question remains: Do I really need a .com domain? This is no doubt a hot-button issue, with some that would argue you don’t and others that would say you’re crazy for even considering not having one.

Rather than giving you a definitive Yes or No (because, you know, I’m the official authority of the Internet and therefore am qualified to decide), let’s take a look at the issue before arriving at any conclusions.

Why is .COM so popular?

To start, let’s think about why .com is so popular in the first place. It’s pretty crazy to think about, but .com was introduced way back in 1985! It was one of the first set of top-level domains introduced, which also included .edu, .gov, .mil, .org and .arpa. Unlike the other options, .com was originally intended for commercial websites. Since there were many more commercial use cases on the web than education, government, military, organizations and technical infrastructure (what the other TLDs were used for, respectively), it’s natural that most websites began adopting .com for their domains.

Because it was introduced so early on, .com became the go-to TLD because it was essentially the first out of the gate. By the time most of the public was even able to to come online in the 90s, .com had already been established as the standard for what a domain should look like. A website in 1996 that didn’t end in .com would have felt to someone like listening to an album on vinyl instead of a CD (this was before vinyl became cool again…and back when people still used CDs).

“If I had a million dollars…I’d buy you a domain name.”

Here’s a stat to help you comprehend how popular .com has become: Over 113 million .com domains have been registered to date (compare this to .net which is in second place at 15 million)! With so many .coms registered it can at times be damn near impossible to find one that’s available. And these aren’t just taken up by websites; people snap up domain names because they know other people are going to want them, with no intention of doing anything other than waiting for the highest bidder to come along. Just how much are people willing to pay for a .com, you ask? It depends on the domain, but consider that vacationrentals.com sold for a record $35 million – and this was purchased by HomeAway mainly just to prevent Expedia from registering the domain!

What makes a great domain name?

When it comes to getting a great domain name, there’s two things you need to consider: memorability and brandability.

It might seem fairly obvious, but people need to be able to remember your domain name in order for them to go to it. There’s no worse scenario than meeting someone in person, telling them about your website, and then they can’t for the life of them remember what it is when they get home. It’s why you would never register lkajdslfgkjsdlfkjwrjweoihwt.com for your website, because there’s no chance anyone will remember it.

It doesn’t matter whether you’re using .com, .photos, .menu or any other TLD; whatever you choose, make sure that it’s the most memorable option available. If the only similar .com domain available is super long – for example, TheOfficialDowntownBistro.com – then it would probably be in your best interest to go for a shorter domain like DowntownBistro.menu instead.

Let’s take a break from all this domain talk and think about a company that’s looking to open a store on Fifth Avenue in New York City. Does the business absolutely need to be on Fifth Avenue? Probably not. But because of the aura and prestige associated with having a business on the famous street, businesses like Louis Vuitton or Versace will feel the need to set up shop there no matter what the cost. Yes, rent will be 100x more expensive than it would be on the other side of town, but that doesn’t matter. Fifth Avenue is an upscale street, so upscale businesses need to be on it.

Giorgio Armani: “I think we’ve found the perfect spot for our flagship store!”

Now, if you owned a Chinese restaurant, would you also need to be on Fifth Avenue? Probably not, especially since the rent would be so expensive it would be seemingly impossible to stay open for longer than a month. Luckily for you, there are a ton of other locations for you to consider. You could find a quiet neighbourhood that doesn’t have a similar restaurant, or you could set up shop in Chinatown where you would be among similar businesses. In fact, you might even be able to attract more business in Chinatown because people visiting the area are likely seeking out your type of cuisine.

What all these examples show us is that in real estate it’s important to find a great location in a great neighbourhood. Similarly, your domain needs to find a great “neighbourhood” as well. If .com is Fifth Avenue, then alternative generic top-level domains (gTLDs) represent more niche neighbourhoods. Depending on who you are and the goals of your website, it might serve you well to start looking at alternatives.

For example, let’s pretend for a second that I’m a photographer and am creating a website to advertise my services. I could register MichaelKeshen.com, but this does not communicate that I am a photographer. Alternatively, MichaelKeshenPhotography.com is better, but it’s pretty long. Using a gTLD, I could go with MichaelKeshen.photography or even MichaelKeshen.photos, which lets people know that the website they’re about to go to is all about my photography. You can think of this as similar to conveying that your restaurant is Italian because it’s situated in Little Italy; a domain that’s within a .photos TLD signifies that it is about – you guessed it – photos.

No domain left behind

Even if you’ve decided to skip getting a .com and instead go for another TLD, that does not mean that you can forget .com altogether. Think about it from your audience’s point of view; if they were to forget about your gTLD and enter .com, what would happen?

Just like a Rubik’s Cube, look at the situation from all angles. Not that I know how to solve those damn things – but that’s a whole other topic.

Last.fm is a great example of a brand using an alternative TLD to better brand its service – a music discovery website. Even though this is their main domain, they have also secured Lastfm.com, which just redirects to Last.fm.

Because .com is so common, people will inevitably make the mistake of entering .com instead of whichever other gTLD you’ve chosen. If you have the resources available to acquire that domain, then it’s worthwhile to grab it just in case. If it’s not in the cards to get the .com, make sure that it leads to somewhere that is very clearly a different website. It would be a shame to attract potential visitors only to send them straight to a competitor!

So…do I need a .COM domain?

No. Technically speaking, you do not need a .com domain because there a ton of other TLDs to choose from (and even more on the way).

Of course, it’s definitely not that simple! The real answer here is “it depends who’s asking.” There definitely is an elite and official quality to .com that other TLDs have not yet matched. If you’re a world-class organization then having a domain ending in .com will help cement this status to others. Consider the exorbitant costs that you might incur acquiring your domain name just one part of your marketing budget.

If you’re not in a position to drop $300,000 for a domain name then things can get a little more complicated. If the .com domain that you’d like is available for a reasonable price then great, stop reading this right now and go buy it (from your good friends at Hover, of course)!

When the .com option is not available, don’t settle on a weird alternate version of what you’re looking for just for the sake of grabbing a .com. Remember, it’s all about memorability & brandability. Adding extra words or abbreviations will start to confuse your audience. Instead, it would be better to find another TLD that really speaks to you and utilize it to make your domain really stand out.

What do you think? Am I crazy for even suggesting that you might not need a .com domain? Know any great examples of sites that use other TLDs? Let me know in the comments below!

*Scale designed by Erin Gillaspy from the Noun Project